‘This is load-of-crap forestry, miles upon miles of it. Everything is dead in there’ 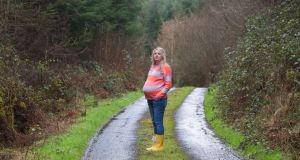 When the musician and dancer Edwina Guckian was a child in the 1980s and heard there was to be a forest planted behind her family’s farmhouse in Co Leitrim, she thought it was going to be like a fairy story and Disney combined.

“We thought, lovely, a forest park we could roam through. We’d meet Bambi!”

Then the trees were planted, tight row upon tight row of Sitka spruces. If this was a fairytale, it was a dark one.

“By the time I was 13 I’d copped on,” she says. “This is load-of-crap forestry, miles upon miles of it. It was never even thinned out. Sometimes our cattle go in and get lost. You can spend weeks searching for them.

“It is dark as night time in there all day. You’d be afraid you’d get lost so you have to have people with torches outside. One time we couldn’t find the cattle and they came out weeks later, starving. Everything is dead in there. There is nothing living.”

Nothing, that is but foxes and carrion crows that come out to hunt.

In 1900, Ireland had the lowest forest cover in Europe at just 1 per cent. That has risen to 11 per cent now and the Government has set a target of 18 per cent by 2050. However, just 2 per cent of our trees are native species, and half of the country’s forests are made up of Sitka spruce which originates in the US.

According to Save Leitrim half of the county’s farmland is now taken over by Sitka plantations, amounting to 34.5 million trees. They are laid out like dark green blankets on the landscape.

According to the forestry companies, we need trees, Sitkas grow exceptionally well on land that was never great for any other crop, and it is a sustainable industry.

Conservationists reject this. “Ireland needs more trees, but it needs the right trees,” says Fintan Kelly of the conservation group, Birdwatch Ireland. “Instead we have the worst trees and they are taking over our last remaining high nature habitats.”

Guckian loves her home place. Beautiful and remote, Leitrim is a small northwestern county with swathes of wilderness, full of bogs, lakes and mountains. On the Border with the North, it has suffered from economic marginalisation, and has been hard hit for generations by emigration.

“I was born here and I always wanted to live here all my life,” she says. She’s expecting a baby and she and her husband are living in her late grandfather’s cottage while they build a house on the family farm behind it, right on the edge of the forest. The house will have a dance studio – Guckian is both a dancer and a dance teacher.

She has been to the fore in reviving the old west of Ireland tradition of sean-nós dancing, which she learned from her grandparents. If the forest was not there, she could see her grandmother’s house from her new home on the hillside. “Sheemore, the fairy hill, is there, and Sliabh an Iarainn,” she says.

Her focus is not, however, on the already lost. Instead she is one of the founding members of Save Leitrim, which is campaigning to ensure that the entire county does not “fall to forestry” as local people describe the process.

Forestry can be seen in every direction from Guckian’s farm. “Two fields back, there is planning permission for more planting. We have fought really hard to keep our land and not to be completely surrounded.”

I honestly think the Government has a plan to depopulate Leitrim

Save Leitrim encourages people to keep an eye on planning applications lodged with the Department of Agriculture for afforestation and related works, and advises on how to lodge objections and appeals. Save Leitrim wants more trees to be planted – but it wants them to be native broadleafs which will nurture bio-diversity.

Leitrim is known for being “unspoiled”. Wild birds and animals that have been driven out of more heavily populated places have continued to breed and flourish here.

Guckian says there are two pairs of curlews on the family’s fields. These birds with their distinctive long beaks and haunting call are at high risk of becoming extinct in Ireland. There has been a 97 per cent decline in their population in the last 30 years, and there are only an estimated 150 breeding pairs left.

Hen harriers, skylarks and plovers are also at risk, along with hares, red squirrels and other woodland animals. Wild flowers which used to be abundant, such as primroses, orchids, bluebells and wood anemones, cannot grow in the tall, dark forests. These are like straws sucking up water, leaving none for the soft, ancient mosses.

An academic study of Lough Melvin, one of the county’s largest lakes and home to a type of trout found nowhere else, identified high levels of phosphorus, which, along with nitrogen, is used as a forestry fertiliser. Salmon and fresh water pearl mussels are at risk. A chemical used to control a Sitka pest, is blamed for killing bees and other insects.

Jim McCaffrey is in the fourth generation of his family to farm in the Leitrim hills. Around him, several farms formerly owned by bachelor farmers are now being planted with Sitka.

“My son is the fifth and my grandson will be the sixth,” he says. “I honestly think the Government has a plan to depopulate Leitrim,” he says.

“I have 23 acres and I am now surrounded on all sides by forestry. All I can see is a wall of green, and there is often a thick mist rising off it. The only place they haven’t planted is Lough Adoon. The sun rises late and goes down early. And when they harvest the trees it is like Armageddon.”

He says local farmers who want to stay on the land cannot compete with the prices offered by forestry companies. “Old people die and the land is sold, often to investors who have no connection with the area. We did a search on 16 farms in one townland. Fourteen were owned outside of Ireland and two were owned by people in the south of the country.

“A big cattle farmer in the south who wants to increase his herd can buy land in Leitrim and plant forestry and it offsets his carbon emissions.”

Ireland has fallen far short of meeting its mandatory EU and UN targets on greenhouse gas emissions and is meant to meet a target of 30 per cent reductions by 2030. It has, since 2014, been increasingly reliant on industrial-scale afforestation in a bid to avoid massive fines.

Conservationists believe the climate impacts of mass afforestation have not been properly assessed. Apart from the loss of fragile eco-systems, the boglands that have been ploughed up for forestry since the 1980s were themselves storing carbon which was released, and the practice of “clearfelling” huge areas of trees with heavy machinery releases carbon, damages the land and allows acidic sediment to drain into lakes and rivers.

Once used for forestry, the land is useless for anything else. The wood produced is of low quality – much of it goes into chipboard and other composite products. Some of the processes used involve burning wood.

If there are investors who feel they are helping to save the planet, Save Leitrim thinks they are deluded. “Foresty in Ireland is like banking and building were before they crashed,” says McCaffrey. “Light-touch regulation with no accountability.”

John O’Reilly, chief executive of Green Belt, one of the companies planting in Leitrim, accuses Save Leitrim of being alarmist. He says that Sitkas “capture carbon exceptionally fast” and that raised bogs and blanket bogs are no longer planted. He also says that 15 per cent of the trees Green Belt plants are broadleafs and that the company carries out eco-surveys.

“The amount of environmental screening now is huge,” he says. He accuses those opposed to forestry of objecting to applications by local people as well as by companies. “I got a call from a bachelor farmer in an isolated area who wanted to sell his land for planting so he could move into the town – he was blocked and will now have to appeal which may take 18 months,” he says.

The artist Anna MacLeod was drawn to Leitrim by its natural beauty and also because it has been possible to find property to rent or buy while other parts of Ireland have become unaffordable. Artists in Ireland are, in general, poorly paid, and there is a thriving community of them in these mountainy places bringing life back to remote townlands from which others have departed.

She points out that the forestry industry is destroying our built heritage as well. She says that in the middle of the forests that almost surround her land, there are two Iron Age forts which are now virtually inaccessible.

“I’ve planted trees. These are native hardwoods, oak, ash, hazel, beech and larch, as well as sycamores,” she says. “All are doing well. This is the sort of forestry that would be sustainable.”

MacLeod says she understands why people want to sell up and leave and why they therefore sell to the highest bidder, often the forestry companies. “But the tradition and culture of Ireland has always included small subsistence farmers, and that should be supported,” she says.

Following a recent protest by Save Leitrim outside Dáil Éireann the Government announced it would conduct a review of the issues. Led by Prof Áine Ní Dhubháin from the forestry department at UCD, it is due to report at the end of August.