Haven and earth in the Basque Country

Thousands of wildfowl, waders and warblers, including spoonbills, drop into Plaiundi’s mudflats, at the mouth of the Bidasoa, a vital rest stop on their annual odyssey to Africa 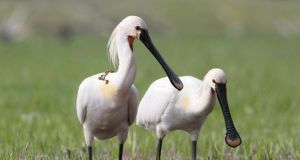 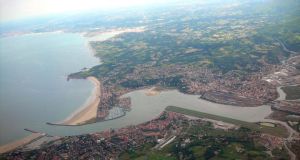 Sanctuary: the mouth of the Bidasoa, between the Spanish and French Basque Countries. Photograph: J Merelo

It’s a foul morning in Plaiundi, a nature reserve on the southern side of the River Bidasoa where it approaches the sea between the Spanish and French Basque Countries. The reserve is just a handful of ponds on the edge of mudflats, almost squashed between a small airport, a motorway and the vast, half-derelict railyards of industrial Irun.

The Basques have a lovely onomatpoeic word, sirimiri, for the kind of unlovely drizzle that drenches you almost before you even realise it’s raining. But the bad weather is good news for birders. Plaiundi is tucked into the elbow of the Bay of Biscay, beneath the first foothills of the Pyrenees. The whole cross-border estuary valley is known as Txingudi, and it sits right in the centre of one of Europe’s great bird-migration superhighways.

Tens of thousands of wildfowl, waders and warblers drop down into Plaiundi’s green, wet haven, a vital rest and refuelling stop on the annual odyssey from northern Europe to Africa.

Some species tend to keep going if the weather is good. But if the Pyrennean vistas are obscured by clouds they drop into Plaiundi and wait for the all-clear. We are looking for one such species in particular, but we have not found it yet.

Nevertheless, we are finding a lot of birds. The first pond is full of waterfowl: mallard, gadwall, little grebes, coots and moorhens. Little egrets crouch, wraithlike in the mist, on dead branches over the water.

More surprisingly, the rugby pitch that predates the reserve holds more birds than the pond. Dozens of ringed plovers dart around among big flocks of gulls. A snipe, a bird I’ve rarely seen out of cover in Ireland, probes the soft earth near the goal posts 50m away. Its bill is so long in proportion to its body that it looks as if it must trip up every time it takes a step. But it does not.

Another wading bird, the ruff, whose summer plumage can be as extravagant and varied as an Elizabethan dandy’s, shows up in midfield. But now it is dressed for travelling, in dull beige and brown.

The hide we visit on the next pond is entirely empty of birds. The next one is little better. But in the third hide, on yet another pond, the scene is packed and busy. Lots of grey herons and redshanks to the right, and a juvenile purple heron (aptly called the “imperial” heron in Spanish) perches in a tree. To our left are so many of the species we have been looking for that, for a moment, I think they must be egrets. Sixty or 70 great white birds stand stock still, ghostlike in the poor light. Slowly it dawns on me that these are spoonbills, stopped in their tracks by the bad weather, just as we had hoped.

Their name is appropriate. If they were feeding they would be moving their spatula-shaped bills rapidly from side to side just under the water, sifting food from the mud. But they are simply resting.

With binoculars the striking yellow outline to the blackish “spoon” is clearly visible. And so, on several of them, are fat yellow bands on their legs. These bands are not natural features; they are identification tags marked with big letters. Ornithologists had ringed the birds when they were fledglings, probably in the Netherlands, so that we can better understand their intercontinental travels.

Once I found out very directly how well this system works. At a summer conference I had heard a Dutch conservationist talk about ringing spoonbills. That winter, in Morocco, I found some on an estuary. One had a ring whose code I was able to read. I emailed the code to the Dutch expert. He replied with delight that he had ringed the bird two years earlier. Seven degrees of separation? With spoonbills three can be enough, it seems.

But back to Plaiundi: the spoonbills scare up every so often, taking off noisily and flying around. They are etched dramatically in white against the background darkness of Jaizkibel mountain before landing again a few minutes later.

Suddenly we have more company in the hide. Mikel Etxaniz, who manages the reserve, comes in with a colleague. They begin to read and note the ring codes. They discuss the data in Euskara, or Basque, as a matter of course. When I first came to this region, under Gen Franco’s dictatorship, the Spanish establishment dismissed Euskara as a peasant language “fit only for talking to children, servants and dogs”. It is good to hear scientists use it today as an everyday vehicle of communication.

Etxaniz is the co-author of an excellent cultural and biological history, in Euskara and Spanish, of the area’s multiple ecosystems.

Txingudi used to be an estuary rich in dunes and wetlands, hosting abundant animal populations we can hardly imagine today. Humans have interacted with this estuary since the Stone Age. The Romans made Irun (then Oiasso) their only permanent Basque settlement. Recent centuries have seen, at ever accelerating rates, wetlands drained and exploited for agriculture, dunes destroyed and marshes infilled to make way for housing developments and golf courses.

The rise of environmental awareness in the 1980s halted this process just in time, and has tentatively begun to reverse it. Plaiundi and another nearby wetland, Jaizubia, have been re-engineered and restored to something approaching their former condition. They represent only a fraction of the great maze of ponds, marshes and tidal mudflats that once greeted migrating birds, yet these small but critically located reserves play a vital role in the survival of the many species that use them, whether for stopovers, overwintering or breeding.

Txingudi’s restoration and conservation is a complex transfrontier project involving the Spanish, French and Basque administrations. Its success is threatened more by increased recreational pressure than by industry and agriculture.

It’s midday now, and the clouds have begun to lift. The spoonbills become restless with the increasing light and rise from the water again. This time they do not come back. They have started the next stage of their long journey south.

They were making this journey before Stone Age humans came to the estuary, but now, like so many natural phenomena, their continued arrival and departure depend on enlightened human policies.