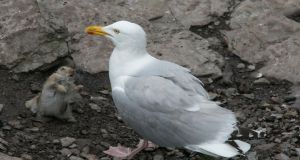 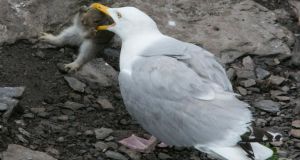 The rabbit tries to fight off the herring gull on Skellig Michael. Photograph: Michael Kelly 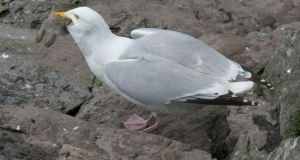 The gull swallows the young rabbit whole after killing it. Photograph: Michael Kelly 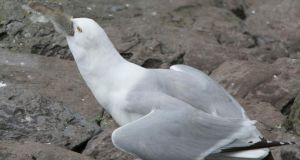 The gull swallows the young rabbit whole after killing it. Photograph: Michael Kelly

As Skellig Michael braces itself for an encounter with Star Wars film crews, life and death continues on the Unesco world heritage site off the Kerry coast. Birdwatch Ireland has said that a baby rabbit’s terrifying encounter with a herring gull, as captured by photographer Michael Kelly, is “ a natural enough” event.

Birdwatch Ireland’s senior conservation officer for seabirds, Stephen Newton, said the rabbit population on Dublin’s Dalkey Island was controlled by predatory gulls, and the same could be said for any coastal location. Black-backed gulls were particularly voracious, and he had witnessed one such gull swallowing a mallard duck whole.

Ornithologists say there is no such species as a “seagull”, but gulls have been in the public consciousness since Fianna Fáil Senator Ned O’Sullivan told the Seanad in mid-July that the birds were attacking children and taking lollipops.

“Rogue gulls tend to be after food, not people,” Mr Newton said.

Skellig Michael’s extensive bird population, including puffins, Manx shearwaters, guillemots and petrels, is in the middle of a breeding season, and there is serious concern among ornithologists about the impact of the proposed filming on the island’s wildlife.

Irish Film Board chief executive James Hickey said “all requisite consents including the NPWS approval are in place with the production company for a limited amount of film-related work on the island”.

The board said the filming programme “has been designed specifically to avoid disturbance of breeding birds” and the NPWS “has approved the proposal on that basis”.

1 Chairman of Fáilte Ireland resigns after it emerged he is holidaying in Italy
2 Gardaí investigate after woman pushed into Royal Canal following alleged racial abuse
3 A million trees, including 400,000 oaks, to be destroyed this week
4 ‘It was pitch black’ - Rescued teenager describes night afloat with her cousin in Galway Bay
5 Urgent report on Dublin eviction ordered by Deputy Garda Commissioner
Real news has value SUBSCRIBE