On coalition: ‘Once they see after the issues we are talking about in Kerry.....we will talk to them’ 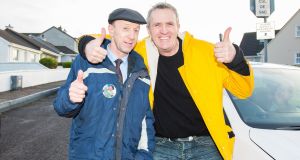 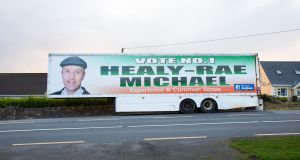 A container just outside Cahersiveen, Co Kerry asking people to for for ‘experience and common sense’. Photograph Alan Landers

Hats off to Roland Drya. The German tourist achieved something the likes of Sean O’Rourke and Pat Kenny have failed to do - he managed to leave Michael Healy-Rae speechless.

The moment came just as the Kerry TD was winding up a canvass in the Harbour View estate in Portmageewhen Roland and his wife, Ursula pulled up in their car.

Assuming they might be locals given the seasonal nature of tourism in these parts so Healy-Rae stuck his head in the passenger window to introduce himself only to discover there was no need .

Roland may have only arrived on holidays from Heidelberg a few days earlier but he is already well acquainted with the man with the flat cap.

“Michael, Michael, Ja, it is Michael Healy-Rae,” he declares, his voice erupting with excitement as he jumps from the driver’s seat and grabs the Kilgarvan man in a bear hug for a photo.

“He is so sympathetic,” says Roland as he proudly shows Michael a photo that he had taken of himself, smiling beside one of Michael’s election posters, which looks as if it was taken halfway up Carrauntoohil.

“Ursula thinks he has great charisma,” says Roland, nodding towards his wife as Michael’s initial look of bemusement turned to something like sheepish embarrassment at this unexpected outpouring of Germanic affection.

“You look to have the German vote sewn up anyway,” observed one onlooker, only for Michael, recovering from his momentary state of shocked silence, to quip “Yes, but it’s not Eurovision I’m running in”.

Momentarily knocked out of his stride, Michael, who had canvassed some 20 houses in the estate faster than a ferret down a rabbithole , was quickly back on his feet.

During the whirlwind canvass , Michael revealed that up until a week ago, he would have said the health service and housing were the big issues.

“Health and housing are big issues but no joking, in the last week, 10 people might ask you a question and nine of the questions are about the pension and people are very confused given the main parties seemed confused too.

“But then there are many people who, when they reach 65, they’re in good form. Remember my late father got a new job when he was 67, he was in good form and he wanted a new challenge so some people want to work on.

Of course, choice is important too at election time and Kerry voters are spoiled for it, having not just one Healy-Rae but two to plump for, with Michael’s older brother Danny also hoping to retain his seat.

Danny was a late entrant last time out and while he polled less than half of Michael’s 20,378 votes, he still got a whopping 9,991 first preferences which saw him elected on Michael’s surplus to take the second seat in the Kingdom.

If Michael was the epitome of speedy canvassing, Danny was adopting a more sedate approach as he waited with a posse of his supporters armed with flyers outside Daly’s Supervalu in Killarney ready to pounce on any passers-by.

“You won’t forget me,” he would say and the reply was invariably “Indeed and I won’t, Danny”, clearly proving elections in Kerry, like everywhere else, are as much about candidate recognition as it is about policy.

Among those giving Danny the nod is Sean Quill from Aghadoe. “We were always Healy-Raes . I voted for his father, Jackie - he was a good man to talk. But Danny can talk enough too - he’s a great talker,” he laughs.

As if to prove the point, Danny explains how he and Michael have divided the constituency so he has some 29,000 voters in Killarney and east Kerry to canvas and Michael some 98,000 voters around the rest of the county.

“There were so many people on to me the last time in 2016 that we should be running two . I didn’t think it was possible but with three weeks to go, Tom Fleming pulled out, so then people were on every day that I should run.”

Conscious that North Kerry was new territory for the Healy-Raes and anxious not to lose the seat his father had won in 1997, Danny and Michael agreed to an uneven divide with the priority being to ensure Michael retained the seat.

“What I asked for was the Killarney Electoral Area that I had been servicing as a councillor. I was conscious that if we didn’t do it right I could be the cause of losing the seat so that’s why we did the divide that way we did and it worked.”

Among those canvassing with Danny is his older brother, John, former general secretary of the Garda Representative Association, and his son Johnny, a councillor, who offered an interesting observation on the Healys of Kilgarvan.

“We’d be on the go all day but no Healy was ever good at sleeping, at least not around Kilgarvan at any rate. One of them was worse than the other. We were up until two last night doing ads and we were up again this morning at six.”

That sort of early rising makes the Healy-Raes sound very much like the sort of get up and go people that Leo Varadkar wants to represent. Is there any chance, the Healy-Raes might prove suitable bedfellows for Fine Gael?

“We don’t mind if it’s Leo or Martin,” says Johnny “Once they see after the issues we are talking about in Kerry, our hospitals and our roads, we will talk to them. But we won’t be Yes men - they have enough of them.”

“We’re not afraid of getting up early that’s for sure , you have to be in our racket . Finian McGrath said one time, he could walk his constituency in 40 minutes but our constituency, it would take you five hours to drive around it.

“To give a service, you have to be out early and out late . Between Michael, Danny, my sister Maura, my cousin Jackie and myself, we’d do well over 200 clinics a month. You meet people and your feet are kept on the ground.”