Unthinkable: Less focus on outcomes can help to counter pessimism 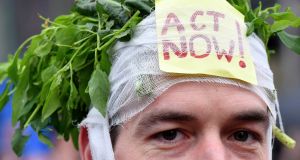 “Being able to identify yourself as part of nature without being laughed at... [is] a huge shift.” Photograph: AP Photo/Geert Vanden Wijngaert

Each week throws up a new report into the perilous state of the planet. Wildlife populations around the world have fallen by an average of 60 per cent over the last 40 years. The UN says we have just 12 years to avoid catastrophic climate change. A dead whale washes up in Indonesia with more than 1,000 pieces of plastic in its stomach.

It’s very easy to despair. However, Louise Michelle Fitzgerald, a researcher with UCD school of politics and international relations, believes one can learn to be hopeful even in dire circumstances.

Fitzgerald, an environmental campaigner and Government of Ireland Postgraduate Scholar who is examining the merits of the EU carbon trading system for a PhD, says “burnout is a huge problem” among green activists.

She highlights the work of veteran ecologist Joanna Macy whose book Active Hope (jointly written with Chris Johnstone) “puts forward the idea that there are two types of hope. One is hope based on chances of outcome. The other is hope based on intention,” Fitzgerald explains.

If you require the former kind of hope before you commit yourself to an action your response gets “blocked” in areas where you don’t rate your chances too high, according to Macy’s thinking. Thus, she advocates the other type of hope: rather than acting only when you feel you’ll get a good outcome, “focus on intention” and let it be your guide.

The advice, says Fitzgerald – this week’s Unthinkable guest – is to “set our intention on what we want to see in the world, and direct everything we do in line with that intention”.

The news of environmental destruction is relentless. Do you ever despair?

Louise Fitzgerald: “I usually stay on top of emotional despair but one night I was just like, ‘Oh my god, we’re actually doomed!’, and I found myself searching variations of ‘What do we do?’ at 3am. That’s when I came across an essay written by Joanna Macy, Working Through Environmental Despair, in which she talked about the fact that we know what’s going on with the environment, and asked why we’re not doing anything about it. She put it down to fear – lots of different types of fear.

“There is fear of trying to do something and not seeing an effect; your ego is hurt because you seem too small to achieve anything. There is fear of upsetting other people; it’s taboo in our society to bring up upsetting topics.

“Macy also told an anecdote about how she was really upset about deforestation and she went to a therapist who said, ‘Oh, it must be to do with your libido.’ You get a similar kind of response here if you tell someone you’re upset – they brush it off, pat you on the back or say, ‘Take some pills for that.’

“Of course, for some conditions medication can help. However, Macy says pain is an evolutionary response to something going wrong; it’s telling us we shouldn’t be living in a disconnected, isolated fashion but we need to connect as people and change the way we are treating our environment.”

So we need to get more in touch with our feelings?

“I think the beautiful thing emerging within some strands of the environmental movement is acknowledging that ‘we are nature’ – being able to identify yourself as part of nature without being laughed at. That’s a huge shift, and we need to create spaces to allow people express the upset in a held way.

“Things are going to get tough. We have signed up for climate change for several more decades, and we have to see that kind of commonality so that, when things go dark, we don’t go insular or become militant – which we can see with Trump and Brexit.”

Governments are supporting market-based solutions to climate change, like carbon taxes and carbon trading. Is that the right approach to protecting the environment?

“Essentially these policies say the only way to value nature is to put a price on it, and that’s problematic if you believe nature has an intrinsic value.

“There is a lot of research that says when you put a price on things rather than valuing it you actually devalue it.

“There is the oft-cited case of the Israeli kindergarten where parents were failing to collect their kids on time. The kindergarten started fining parents who turned up late but instead of late collections declining they skyrocketed. Whereas before people were regulating themselves by a moral compass, and feeling guilty for not collecting on time, the ability to pay removed that moral guilt and people just saw this as a service they were paying for.

“Drawing on Jutta Kill’s work, and others, what worries me about carbon trading, paying for carbon sinks and other market solutions is that there’s an element in which they alienate us from the environment. They reinforce the idea that nature is ‘out there’ to be commodified, and alienate us from the idea that ‘we are nature’, that we are deeply interconnected with the environment.”

But you’re not going to get everyone to accept ‘we are nature’. Surely market-based solutions are better than nothing?

“The worry I have sometimes is that in trying to win the battle we will lose the war. A fundamental assumption behind the market approach is that the way the system functions is generally sound; we just have to tweak it at the edges and make it value these other things, and then it can keep going on the path it’s on. I don’t think that’s the right way to think.

“It’s not carbon in the atmosphere that’s causing global warming; it’s the system that put it there. I think we need to go back to basics and look at the fundamental assumptions of our system. That’s not necessarily just capitalism but any industrial, growth society that sees us as separate from nature, and sees nature as a sink for our rubbish or merely a source of resources that can be exploited.”

Might one argue that the Paris climate change agreement is a step backwards as it props up the existing system?

“I like to think people are good, I like to think the people signing these agreements care about the world, but theirs is a privileged point of view. They look to market-based solutions because the market has worked out well for them. But if you’re living in sub-Saharan Africa or low-lying islands, where a 2 degree temperature rise is effectively a death sentence, markets won’t save you.

“And the implementation of these policies such as biodiversity-offsets or carbon-offsets are associated with serious justice impacts on the ground, like forced displacement and loss of livelihoods, particularly for indigenous peoples.

“The Paris agreement and other international agreements are really important but it should also be said that it’s a very old way of thinking to believe people at the top are going to sort this out. All the successful environmental movements have been from the bottom up. We don’t have to wait for the politicians, or place our hopes in Paris, but we can use Paris as a hook on which to hang our demands.”