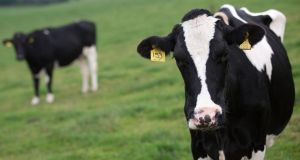 Ireland’s agriculture industry accounts for 32 per cent of the country’s greenhouse emissions, the highest in the European Union. The EU average is about 9 per cent. Photograph: Simon Dawson/Bloomberg


The Government is intensifying efforts to persuade the European Commission to give it leeway on the way it calculates the Republic’s greenhouse emissions targets, amid serious concern that the State will be unable to meet EU climate change targets by 2020.

The Republic is virtually certain to miss its target of a 20 per cent reduction in emissions from sectors not covered by the EU emissions trading system by 2020, which could leave the exchequer liable for hundreds of millions of euro in fines.

At issue is Ireland’s agriculture industry, which accounts for 32 per cent of the country’s entire greenhouse emissions, the highest in the European Union. The EU average is about 9 per cent.


National herd expansion
The Government is actively encouraging the expansion of Ireland’s agriculture sector as part of Food Harvest 2020, its strategy for the agri-food sector.

The national herd is expected to significantly expand as a result of the abolition of EU milk quotas next year, a development that is perceived to hold huge potential for Ireland’s dairy industry, which will no longer be constrained in the amount of milk it can produce.

But the focus on agriculture as a driver of economic growth puts the Government at odds with the EU’s climate change policy. Under the current EU climate change package, the Republic, along with a number of other countries, is obliged to reduce the emissions that come from sectors that are not part of the emissions trading scheme (ETS), the scheme applied to energy-intensive industries, by 20 per cent by 2020. According to the European Environmental Protection Agency, the State is expected to reduce emissions by 2 per cent by 2020.


Unfair disadvantage
Ireland argues that the current system, which calculates targets based on gross domestic product (GDP) per capita, unfairly disadvantages countries with high GDP compared to GNP (gross national product) such as Ireland. Officials are calling on the European Commission to take account of the country’s grasslands, forests and bogs in the calculation of the Republics greenhouse emissions. By absorbing carbon from the atmosphere, these carbon ‘sinks’ can significantly offset carbon emissions. An expert from the Department of Agriculture has been seconded to the commission in Brussels in recent weeks in an effort to set out Ireland’s position.

The production of methane by livestock is the main contributor to Ireland’s high level of agricultural emissions. Energy is the second largest emitter, followed by the transport sector.