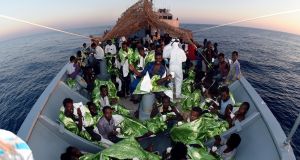 As word spread through the Naval Service last week that Operation Sophia, the European Union’s military mission to rescue migrants in the southern Mediterranean Sea and disrupt the activities of traffickers, was being scaled back, there was huge disappointment in Irish military circles.

Ahead of Wednesday’s breaking news, an email by a serving member was circulating among members of the Defence Forces on Tuesday night.

“I can, without any doubt, say that tomorrow I will begin my discharge,” said the unidentified writer, understood to be an able seaman.

The killer line was further down his note to colleagues and friends: “The truth is, without Operation Sophia-type missions, the Navy is nothing – well to me anyway now.”

Make no mistake: the scaling back of Sophia is not good news for the Naval Service.

The search and rescue aspect of the mission has ended because of Italy’s refusal to allow any more rescued migrants disembark there. No other EU member states were willing to step into the breach either, such is the fear of populist politicians using the issue as a political and social destabiliser.

All that will be left of Operation Sophia will be aerial surveillance of smugglers along the north African coast and training, aimed at bolstering the effectiveness of the Libyan navy and coastguard, in the hope of stopping the usually unsafe migrant vessels setting to sea at all.

Lamenting the change and predicting the circumstances that necessitated maritime deployment in the first place could easily recur, a senior Defence Forces source remarked: “Do we have to wait again for more bodies in the sea before we start rescuing people?”

Deployment in the Mediterranean gave the Naval Service a national and international profile of an altogether different quality to that derived from the important roles it plays offshore in Ireland in contraband interdiction, fisheries protection and, from time to time, search and rescue.

And it gave naval personnel of all ranks an opportunity to serve in an action-packed overseas mission, something generally confined almost exclusively to members of the Army.

Operation Sophia originated in an EU decision in 2015 to try to deal with a migration crisis that had seen mass drowning in the Mediterranean between Libya and Italy.

From a mission involving rescuing people at sea as well as boarding, searching and seizing vessels, it grew also into one of disrupting the activities of people smugglers and training the Libyan navy and coastguard to patrol its own seas and allow for EU withdrawal.

The Irish Naval Service involvement was initially via a bilateral agreement with Italy, a search and rescue mission known as Operation Pontus.

Last year, the Government decided to participate fully, under the umbrella of the EUNAVFOR-Med, in the wider interdict and disrupt aspects of the operation, known as Operation Sophia, as well as search and rescue.

Since becoming involved in 2015, Irish Naval Service personnel have rescued more than 18,000 people. The experience has left a deep impression on almost all who took part.

Brian Fitzgerald, Operations Branch Commander of the Naval Service, captained the LÉ Eithne in the Mediterranean in 2017. The ship directly rescued some 1,500 people and assisted in the rescue of several thousand more.

Capt Fitzgerald does not hide his emotions when recalling the impact the experience had on him.

He was asleep one night, his ship and crew having rescued 712 people earlier in the day when he got a call to say there were now 713.

A woman had given birth. He went to visit her.

“I carry that story with me.”

He says that no one was unaffected by what they had to do, and what they saw, on the mission.

Crew members were faced with “hundreds of people struggling in front of them [in the water or on sinking vessels] and with having to make decision rescuing one person, knowing that might mean another might not be pulled to safety”.

“It was really emotionally testing,” he says.

Despite that, he has no hesitation in ranking the Naval Service participation in the overall operations, Pontus and Sophia, as hugely important for it and the whole Defence Forces.

And in operational and developmental terms, the mission was a huge opportunity for real-time testing and proving.

“We were working cheek by jowl with first world militaries and we would regard them militarily as cutting edge,” he says.

“The Irish Naval Service outperformed and outpaced all of these navies, in terms of return relative to our size. And that’s because we do our day-to-day work in the Atlantic and were able to carry on [in the Mediterranean] when others were not.”

For naval command and senior ranks across the Defence Forces, the real life application of what is taught in training pays huge dividends.

“To see the level of professionalism that [Sophia] brought out – the motivating factor, the bringing of a ship that contain an esprit de corps – to see that being brought to its absolute pinnacle to deliver on an extraordinary mission leads to all sorts of positive returns,” says Capt Fitzgerald.

“I have nothing but admiration [for] what these men and women delivered for Ireland.”

It is the loss of this level of experience, certainly for now, perhaps for good, that is lamented.

At a more mundane but keenly felt level, the suspension of Operation Sophia, and consequent non-deployment of the LÉ Eithne, means significant loss of earnings to its 60-strong crew. With special overseas allowances of some €80 a day for a four-month long mission, many crew members stood to save close to €10,000.

This was a major disappointment for the email writer.

“Me and my girlfriend and young son have counted on this mission to save towards a deposit for a mortgage as we both struggle to make ends meet and saving is hard,” wrote the seaman.

He wrote that he “loved the idea of the Navy” and felt that senior officers believed “they are providing a service to the State that will be noticed by everyone or anyone walking down the street”.

A statement from the Defence Forces expressed pride in what the Naval Service did during Operation Sophia.

“Our sailors were tested alongside navies of our European partners and Ireland can be extremely proud of their performance,” it said.

“These deployments will be seen as an historic period in our Navy’s development, where training, capability enhancement and professionalism resulted in 11 successful missions which were recognised and applauded both at home and internationally . . . Our sailors and their families can be truly proud of their achievements, having shown their capability to operate at the highest international level.”

Mark Keane, the president of Pdforra, the Defence Forces rank and file representative body, said he hoped the Naval Service would find another overseas mission.

“People had themselves prepared for going,” he said. “We hope there will be another Naval Service overseas mission to replace it. Off the coast of Turkey, the English navy is involved in rescuing and monitoring and maybe there’s an opportunity for us there, especially if with Brexit, they pull from that.”

The Irish Refugee and Migrant Coalition, an umbrella body for 23 organisations, on Monday expressed alarm at the ending of the mission. Colm O’Gorman of Amnesty International Ireland said it was an “outrageous abdication of EU governments’ responsibilities” and would leave no one to save the lives of people in peril.

MSF Humanitarian Affairs adviser for Libya and Search and Rescue, Hassiba Hadj-Sahraoui, said: “The decision by the EU to stop maritime deployments for Operation Sophia is irresponsible and reckless.”