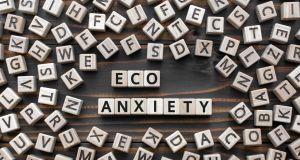 Eco-anxiety: the concern about what’s happening to the planet is a very real in the bodies of young and older people. File photograph: Roman Didkivskyi/iStock/Getty Images

The news is physical. That’s worth remembering when we read about rising levels of stress and anxiety in young people frightened by climate change.

Fear created by reports of climate change isn’t just a sort of intellectual attitude. Fear, stress and anxiety exist in the body in the form of higher levels of blood pressure and of elevated adrenaline which drives that blood pressure.

The fear is all the greater because we see the destructive effects of climate change happening in real time.

We know from previous events that bad news about economies increases anxiety in the wider population. But unless you are directly affected, an economic dip remains theoretical until it affects you or someone you know.

With climate change it’s different. The news brings us fires in Australia, drought in Africa and, even here, more and more warnings about what – for us – is extreme weather.

For young people this all brings the fear that, as some protesters declare, they will not die of old age because climate change will get them first. And for pre-teenage children whose ability to analyse abstractly is limited this can be very scary indeed.

The signs that eco-anxiety is proliferating can be read in recent reporting on the issue. Last year, The Irish Times devoted a five-part series – Changing World, Changing Minds by John Sharry – to the emotional side of climate change. The Washington Post, the Guardian and the BBC have all reported on increasing levels of eco-anxiety, especially among the young.

UK psychologists have formed the Climate Psychologists group which aims to encourage individuals, families and organisations to translate their climate anxiety into action as an antidote to emotional distress.

Another UK-based group, Force of Nature, runs workshops in schools and universities to encourages young people in particular to “step up, rather than shut down”, by doing what they can to help the planet. In moving from anxiety to effort, young people can reduce those levels of anxiety, the group believes.

One antidote to anxiety is anger. As John Sharry pointed out in the Irish Times series, “people worried about climate breakdown can easily become anxious, overwhelmed and depressed at the challenge it presents. The companion emotion of anger can act as an antidote to these disabling feelings.” But it needs to be used as a driver of constructive action.

I don’t have a solution to all of this beyond saying that those who exercise power in society need to understand one thing: the concern about what’s happening to the planet is a very real in the bodies of young and older people. Such emotions create a fear-driven urgency that needs an outlet. In the absence of an outlet, that urgency could turn inwards in the form of depression or hopelessness.

Action by government would help on an emotional as well as a climate level. I have a sense, though, that political systems, here and elsewhere, don’t have a fear-driven sense of urgency about climate change. The issue didn’t feature as strongly as I had thought it might in the general election. Nor, at the time of writing, has it featured in the discussions that took place afterwards (I have no idea where those discussions will have gone by the time you read this).

When I was growing up we had a fear of nuclear war which would wipe out the planet and everything in it with one devastating strike.

But we didn’t have a nuclear war happening on our screens in real time and that’s the difference between then and now.

It has to be scary for young people to suspect the adults in the room aren’t really all that energised about dealing with what they fear as a threat to their very existence.

If whatever government is formed here manages to run for a normal term, then a lot of those scared children will be voters by the time the next election comes along.

Stand by for some very stormy political weather.

But be alert also to the emotional toll eco-anxiety is taking, especially on the young.