Give ivy a break – it’s a sanctuary for beleaguered wildlife 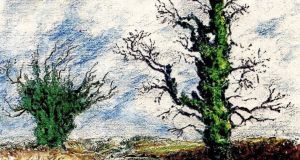 Ivy is opportunist, like any climber seeking light, but in no way parasitic. Illustration: Michael Viney

At the edge of spring, a changing light adds a glitter to the ivy that cloaks so many Irish trees. There are parts of the west where it can seem, next to grass, the dominant winter vegetation. Across the island, too, the landscape is clotted with spires and clumps of what, by sheer vigour and ubiquity, could pass as our national plant.

If one mourns ivied trees, as many do, the dynamic ascents of Hedera helix (at 2m-3m a year) disfigure the grace of trunks and boughs and threaten to bring them crashing down in storms. Even without such worries, and acknowledging the worth of tree ivy to insects and birds, people can be sorely aggrieved by its impact on “natural beauty”.

Most of Ireland’s ivy, especially in the west, is a subspecies of the regular European and English kind. Hedera helix hibernica, or “Atlantic” ivy, with broader leaves, grows not only up trees and hedgerows and the walls of ancient ruins and shaded cliffs, but across the floors of woods and into the rocky crannies of our windiest offshore islands.

Beyond the reach of cattle, deer and – notably – goats, ivy could grow as old as the oldest-surviving trees. In his History of the Countryside, Oliver Rackham wrote: “On an island in a boggy lough in Co Offaly is an extraordinary wood of great ancient oaks hung with ancient ivies [one ivy trunk is thicker than a fat man].” Today’s webs of boundary fencing and the housing of livestock in winter may have helped the plant’s present advances.

Ivy is opportunist, like any climber seeking light, but in no way parasitic. It takes water and minerals from its own roots at the base of the tree, attaches to the bark by clusters of little rootlets that cling but do not penetrate, and makes its own energy from sunlight.

Once in the canopy it can flourish into bushes with flowers and sprays of berries. This is the evergreen ivy crown or “tod” that winter storms can hammer against, levering the tree roots and a column of leaves filled weightily with rain. On an old tree rooted into sodden soil, the 50th gust can bring disaster.

Ash trees, late to burst into leaf and early to lose them, offers climbing ivy the most light. After the loss of wayside elms through Dutch disease, ash became ivy’s main roadside climbing frames. Now we wait to see how far ash dieback disease will kill these, spreading from infected ash plantations.

The value of ivy to the natural world has already gained wide public trust. It needs even better understanding, countering the misgivings of those who think there’s far too much of it.

The worldwide threat to the insect world gives the worth of ivied trees new significance. Lists of the insects and mites that feed on ivy and find shelter within it run into scores of species, and the pollen and nectar it provides from its flowering, as late as November, is a key resource to pollinators – bumblebees, honeybees, hoverflies, butterflies and wasps. Ivy’s insects, in turn, are a food source for bats, which pluck them off the leaves as well as catching them in the air.

The autumn pollinators ensure the supply of ivy’s glossy, dark berries: winter food for thrushes, woodpigeons, blackcaps and more. And these spread the seeds in their droppings, perhaps in clusters at a time.

As part of the All-Ireland Pollinator Plan, local councils are asked to locate and protect odd corners of their land where ivy, along with brambles, shares some freedom to grow. And Dublin is one of many local authorities now taking ivy’s value seriously in their dealings with trees.

Its published policy (Dublin City Tree Strategy 2016-2020) details ivy’s “great importance to wildlife” and promises to leave it alone except “where ivy growth is excessive and adversely affecting tree health”. This should help leave enough to support the “important nesting sites for blackbirds, wrens and other birds” – sites that may, indeed, already be booked for spring.

In the wider countryside, the occasional, tragic human casualty of windthrow has brought about a spate of roadside felling. In one notable storm, at Christmas 2013, a heavily ivied and hollow ash fell on a car in Westmeath and fatally injured a young woman. This prompted the felling of many more trees and calls for their clearance from all the busy roads.

One tree surgeon was called in to inspect a line of nine ivied beech trees, each of them more than 250 years old. He found two he thought potentially dangerous, but the landowner decided on felling them all, together with half a dozen ash. It was an act of no small regret, but prompted by neighbourly concern.