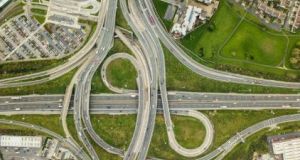 Volumes of road traffic in the first two weeks of the year have been half of what they were before the lockdown, new figures reveal.

Transport Infrastructure Ireland traffic counts show volumes are also almost a third down on the average last year, when there were nine months of various restrictions.

The most dramatic fall-off in traffic has been on the M1 near the Border at Jonesborough, Co Armagh. There has been an average of 10,188 vehicles crossing the Border on a daily basis to date this year.

The average daily traffic volume on the busy N7 at Citywest outside Dublin shows there have been 51,719 vehicle journeys per day to date in 2021.

Traffic on the N18 between junction 4 at Cratloemoyle and junction 5 at Cratloe, Co Clare, into Limerick city, is down to 42 per cent of what it was pre-lockdown levels. There have been an average of 16,674 journeys per day this year in comparison with 39,615 in 2019 and 27,603 last year.

The percentage of traffic volumes consisting of heavy goods vehicles (HGVs) is much higher than it was in 2019. This indicates an even greater fall in journeys by private cars.