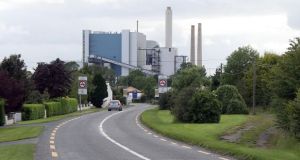 The Lough Ree electricity power plant was closed after the Environmental Protection Agency said it would prosecute the ESB for discharging hot water into the Shannon.

The ESB is to reopen its Lough Ree electricity power plant in Longford, which was closed for environmental reasons three months ago.

The peat-powered midlands station will recommence operations over the next week.

The plant is to reopen as the UN convention on climate change takes place in New York and after millions of young people protested on Friday across the world demanding action against global warming.

In a brief statement on Sunday the ESB said: “Based on the current conditions on the river Shannon, ESB is now in a position to return the Lough Ree power plant to service.

“Over the next week the plant will gradually recommence generation at prudent levels to ensure compliance with our environmental licence obligations.”

Seventy Bord na Móna staff were laid off when the Lanesborough plant stopped operations after the Environmental Protection Agency said it would prosecute the plant for discharging hot water into the Shannon.

While climate campaigners have called for an immediate end to peat burning for electricity, Fianna Fáil climate change spokesman Timmy Dooley said his party’s approach was to have a managed reduction of the use of peat and coal.

Midlands communities fear for the future of some 800 Bord na Móna jobs and Mr Dooley said that if reduction in the use of fossil fuels is done more quickly than set out “you alienate the local community and end up putting people off” addressing climate change.

Green Party leader Eamon Ryan said the ESB was making a mistake in reopening the plant. “We have to stop burning peat and coal,” he said.

People must take on board the “simple message” of the climate protesters, who demonstrated in their millions globally on Friday, that “we have to listen to and act on climate science”, and stop burning fossil fuels.

The Dublin Bay South TD said the ESB posted significant profit levels last week for the first six months of the year, and the reopening of the midlands plant was “not because of financial necessity”.

Mr Ryan said protection of workers was important and his party had last week introduced the Just Transition Bill in the Dáil to protect employees in these exact circumstances, which the Government has approved for progression through the Oireachtas.

It provides for a commission that would be established for employees and the local community to mediate and provide for retraining and alternative job creation in these sectors, as the State transitions to a climate-friendly status.

People Before Profit TD Bríd Smith said she believed the “current conditions” on the river meant the season had changed from summer to autumn, but “spewing hot water into the Shannon deoxidises the water, so it is still a problem”.

The Dublin South Central TD said “you can’t just stop production of an electricity power plant and go straight to the use of renewable energy”. The protection of workers’ jobs and their redeployment to other areas was vital.

She said the Government was making no serious effort to develop renewable energy, but leaving that issue to the private sector.

In the same way that the State started up the ESB to “switch on the lights, it should establish a State agency to keep the lights on through renewable energy of wind and solar power and should do so on a very large scale”.

Ms Smith said she will ask the chair of the Oireachtas climate change committee, Hildegarde Naughten, to invite the ESB before the committee to address the issues.