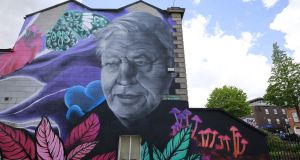 Free outdoor screenings of the acclaimed David Attenborough documentary Our Planet will be staged in Dublin next month to support the campaign for urgent action on climate change.

“Our Planet – Powered by the Sun” takes place on Friday September 13th in Merrion Square and Saturday September 14th in Blackrock Park, Dublin. The screenings will be powered using battery and solar technology.

The screenings are being organised a week before a global protest demanding an end to fossil fuels, when millions of young people are expected to take the streets.

Happenings director Peter O’Brien said: “Surface temperatures are setting new heat records, there are record breaking ice melts and sea levels are rising at an alarming rate. We are at crisis point and simply must act, the world needs to unite on this issue or we are fighting our way to extinction.

“We have no diesel generator for these events – we want to spread the message that is no need to use fossil fuels to the extent that we do,” he added.

Venues open at 7.30pm with screenings from 8:15pm. Refreshments will be available at the leave “no trace events”. Further details at www.happenings.ie