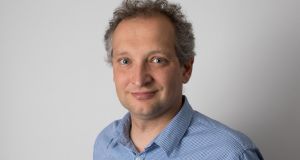 A scientist based at Maynooth University, Prof Peter Thorne, has been recognised as a leading expert on global climate change with his appointment to a United Nations body examining the subject.

Prof Thorne has been appointed “co-ordinating lead author” to the UN Intergovernmental Panel on Climate Change, reports from which have been the key scientific influence on the global response to human-induced global warming over the past 30 years. Its work was the basis of the landmark 2015 Paris agreement on climate change, which has been signed by 195 countries.

The panel’s role is to provide policymakers with regular assessments of the scientific basis of climate change, its impact and future risks, as well as options for adapting to climate change and mitigating the worst of its consequences. It is entering its “sixth assessment cycle” which will report in 2021.

It was established in 1988 by the World Meteorological Organisation and the UN Environment Programme. Prof Thorne’s role is the most senior position an Irish scientist has ever held on the panel.

A professor in physical geography at Maynooth with a particular expertise in extreme weather events and historical analysis of global warming, he is director of the Irish Climate Analysis and Research Units group (Icarus).

He will join a working group that will focus on the physical science of climate change and “co-ordinate and lead the assessment of observational evidence for ongoing climate change across the atmosphere, oceans and ice”.

Commenting on the development, Prof Thorne said the panel’s work was “crucial in shaping how the international community approaches the issue of climate change”.

Climate change had always been a feature of the environment but, he added, “recent generations have seen unprecedented shifts in the Earth’s temperature and weather patterns, due to human activity and particularly the burning of fossil fuels. This is a scientific fact that cannot be dismissed or ignored.”

“Even in a worst case scenario humanity as a whole will survive climate changes, but now is the time for us to decide what kind of world future generations will call their home, and whether we want humanity to merely survive or thrive.”

The panel’s assessments inform negotiations on the UN Framework Convention on Climate Change. Outside of those nominated to its working groups, thousands of other experts in climate science contribute to its reports by acting as reviewers.

The president of Maynooth University, Prof Philip Nolan, said its researchers had “made a vital contribution” to the global understanding of and response to climate change issues over the last 30 years.

“The entire Maynooth community commends Peter on this achievement and looks forward to supporting him in his endeavours in the coming years.”

Prof Thorne said it was a great personal honour and challenge to be nominated but that the development reflected the high quality work undertaken by colleagues within Icarus and at other Irish universities and institutes.