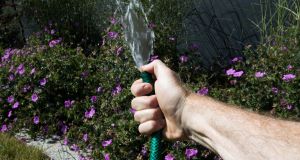 Irish Water has lifted all remaining water conservation orders that were in place around the country. Photograph: Tom Honan/The Irish Times.

Irish Water has lifted all remaining water conservation orders that were in place around the country.

Irish Water said the move followed a meeting of its board which examined data “indicating the reduction in demand; the availability of water resources and the prevailing weather conditions mean that the justification for the water conservation order no longer applies”.

Restrictions were originally introduced in Dublin on July 2nd in response to a severe drought, and was extended nationally on July 6th. This was the first time Irish Water has had to instigate a water conservation order.

The restrictions were introduced for at least a month at first and were then extended for the duration of August.

In August, significant rain fell in the north and western regions, replenishing water sources in those areas to the extent that specific usage prohibitions were lifted in those areas, such as the use of domestic hosepipes for watering gardens, filling paddling pools and washing cars.

However, at this time supplies in the southern, eastern and midlands regions had not recovered and a new water conservation order was issued.

The order took effect on September 1st and was due to conclude at midnight September 30th but significant amounts of rain fell this month in these areas.

“Increased rainfall has meant that the Water Conservation Orders can be lifted now. Rainfall rates have returned or are returning to average rates for the time of year at all observational stations in the Southern, Eastern and Midlands regions,” Irish Water confirmed.

As rainfall was returning to average rates, water sources which were very dry during the summer were beginning “to recharge more quickly”, she said.

“It is essential that people continue to conserve water. We are really grateful for all the efforts people made over the past few months in their homes and businesses. It was really encouraging to see.”

The heatwave this summer saw the highest June temperature (32 degrees) in Ireland in more than 40 years, which was recorded at Shannon Airport weather station in Co Clare.

A heatwave occurs when the temperature exceeds 25 degrees for five straight days while a drought is declared after 15 days with little or no rain.

This summer, Ireland was not only in the grip of a heatwave but, according to Met Éireann, the country experienced a state of “absolute drought”.