Biting Scandinavian winds will cause temperatures to plummet this weekend 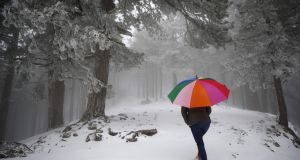 A woman in Corsica walks in a forest covered by snow as a wave of cold weather hits France on Thursday. Photograph: AFP/Getty Images

Wintry weather is on the way this weekend as freezing Scandinavian winds will cause temperatures to plummet.

From Friday the temperatures is set to drop below freezing but the cold snap will not come into full force until Monday.

“High pressure over Scandinavia is continuing to influence our weather with mostly dry conditions at first but becoming very cold with wintry showers.”

“It will be rather cloudy and misty in many areas on Friday morning with scattered patches of drizzle, but brighter later, with some sunny spells developing in gusty southeasterly winds,” according to Met Éireann.

Friday will see top temperatures of between 5C to 8C during the day but it will feel colder in the wind.

Overnight temperatures will drop to around -1C to 2C in the east and north with some frost, but less cold further south and west under cloudier skies.

Saturday will be cloudy at first but good sunny spells will develop in the east and north during the day with some hazy sunshine in the southwest and west later.

Saturday night will be dry with good clear spells, turning colder under clear skies with lowest temperatures falling to between -2C and 2C with a widespread sharp frost.

Sunday will be a dry and sunny day with top temperatures of just 4C to 7C.