Michael Viney: We have never known about more species – and the list is growing 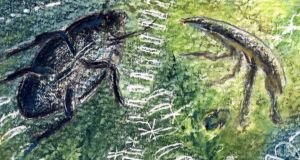 All summer, fresh images of Irish wildlife have appeared in the inbox of “Eye on Nature”, often through capture with smartphones that are also cameras. Colourful caterpillars, mystifying moths, surprising spiders, strange things on the sand, figure in a daily gallery of creatures great and small – mostly small.

Some pictures are magical close-ups that would have once been beyond the chances of the average amateur photographer. The instant opportunism of the phone-camera brings exciting new citizen glimpses of the natural world.

The accompanying message is often, essentially: “What’s this?”

The question is directed to Ethna, with an archival instinct and dogged eye for detail.

Every Eye on Nature correspondent gets an answer, or a damned close guess

Finding the answer can sometimes take a morning with books or broadband – often both – or further consultation with a specialist. Everyone gets an answer, or a damned close guess.

The need to put names on nature once singled out the vital uses (or dangers) of plants for food and medicine. Today’s interest in plants can be largely aesthetic, but haunting all connection with the natural world is the sense of its modern danger.

For all the realities of threats and extinction, however, there were never more species known to humankind, or a greater awareness of the vastness and complexity of life still waiting to be discovered.

In 2009, the National Parks and Wildlife Service (NPWS) published a taxonomic inventory of animal species so far known in the Republic. An earlier report, in 1996, estimated that there were at least 14,616 species in the country. The new one has raised the total to at least 19,122, an increase of almost one-third (Irish Wildlife Manual No 38 at npws.ie).

Arthropods – jointed-limbed animals – account for most of them, with 11,260 insects, 1,775 crustaceans and 1,107 spiders and other arachnids. Molluscs added another 1,088, with many more to come. Indeed, it was stressed that these figures were “a significant underestimate of the true number of species likely to occur”, especially in Ireland’s vast share of the deep sea.

The recent boost in records comes mainly from greater research and better access to results, and its checklist ties in with conservation

The recent boost in records comes mainly from greater research and better access to results, and its checklist ties in with conservation. One example of threats to particular insect groups is the NPWS “red list” of Ireland’s 244 water beetles that found 40 of them at risk.

With its columns of Latin names, the new inventory can seem daunting. The use of Latin is a legacy from the 18th century, when it was the only international language, and the work of Carl Linnaeus, pioneer of the two-name system of nomenclature. Today, with constant discovery of new species and revision of their history, the system still helps to stabilise taxonomy.

This not only identifies a species by its physical appearance and character, but sets it in a group of similar species with a common ancestry, called a genus. This group, often quite small, takes its place in a hierarchy of classification, from family and phylum right up to great kingdoms of life.

Just when science seemed settled on five kingdoms of more or less equal size – animals, plants, fungi, protozoa and bacteria – the immense diversity of the ocean and new genetic research have been pressing additions and alternatives. The Irish inventory admits a sixth kingdom of organisms, the chromista, this from a classification as recent as 2004.

Chromista means “coloured” (though some of them are not), and most use chlorophyll without storing energy as starch, which makes them different from plants. Their supergroup links microscopic algae such as diatoms with the giant kelps and makes the chromists hugely important in ocean life.

The tiny size of marine organisms, right down to single-celled life, teases the imagination

The tiny size of marine organisms, right down to single-celled life, teases the imagination from the inventory’s brief introductions.

Jaw worms, for example, the Gnathostomulida, are near-microscopic creatures in the interstices of the seafloor.

“They have a specialised muscular jaw,” writes editor TP Inskipp, “which they use to scrape smaller organisms off grains of sand in their muddy seabed habitat”.

Even more microscopic are the recently identified Cycliophorans, waving their little cilia from the lips of lobsters.

Taxonomy, an ancient skill of science, has proceeded by the physical appearance of a living thing, its comparison with others, and distinguishing its special character or habitat.

For many of today’s young scientists, however, this can seem old hat, succeeded by the greater precision of molecular biology and genomics. Taxonomy still has its place among the plant sciences taught by Trinity College Dublin, for example, but DNA is there as well, with its impact on plant classification.

A DNA bar code may, indeed, be more exact in distinguishing one organism from another and tracing its origins in the evolution of life. But for the ecologist setting out in conservation, the old (or much-revised) Latin name is still your only man.

Michael Viney’s Reflections on Another Life, a selection of columns from the past four decades, is available from irishtimes.com/irishtimesbooks; viney@anu.ie.

1 Restaurants and gastropubs to reopen in December under Government plan
2 In Brexit end game, Johnson scours menu of unpalatable choices
3 A bridge, a border and two Covid worlds
4 Helen McEntee holds up well for someone with barely a leg to stand on
5 400 – yes, 400! – Irish retailers for all your online Christmas shopping
Real news has value SUBSCRIBE