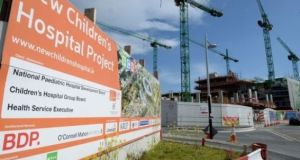 There won’t be “a mad increase” like 40 per cent in the cost of the new National Children’s Hospital as a result of measures to prevent the spread of Covid-19, Tom Parlon said on Friday. File photograph: Alan Betson

The director general of the Construction Industry Federation (CIF), Tom Parlon has said he “misspoke” at an Oireachtas committee earlier this week when he said measures to prevent the spread of Covid-19 could increase the cost of complicated projects like the new National Children’s Hospital by 40 per cent.

“I misspoke, I should have said that productivity could be reduced by 40 per cent while severe restrictions are in place,” he said on Friday.

It had not been his intention to give the incorrect impression, he added.

“I didn’t clarify the situation but I’m happy to clarify it now ... there won’t be a mad increase like that,” he told the Today with Sarah McInerney show on RTÉ Radio 1.

Mr Parlon said that the construction industry is now at the earliest stage of the return to work and it was too early yet to determine exactly what the increase in building costs will be because of physical distancing restrictions.

The figures for what increased costs may apply will become apparent in the coming weeks, he said.

The focus of the Oireachtas Covid-19 committee, at which he had been speaking, had been the safe reopening of the construction industry which had “gone off extremely well” added Mr Parlon.

“We’re going to learn as we go along. This is an unprecedented situation.”

He pointed out that because of physical distancing restrictions interior work on construction sites is going to be difficult which is going to reduce productivity “considerably”.

That situation is going to apply for as long as the physical distancing restrictions remain in place, “but we don’t know when that is going to be lifted.” Mr Parlon hoped that would happen before the end of the year.

Speculation that it could take an extra three to four years for the completion of the National Children’s Hospital was not accurate, he said as it was unlikely that the physical distancing measures would continue that long.

But he said adherence to social distancing measures will increase the timescales of projects proportionately.

“The timescales of two year projects for example could end up taking four or five years, due to the fallout from social distancing measures because headcounts are reduced on most sites.

“I quoted a figure myself of a very big installation which would have needed 1,600 people and the maximum was 5-600. So you can imagine if you only have one third of the workforce, it is going to extend the period by three times the amount.

“If a group of engineers and machinery drivers are working on a motorway project working on a mainly individual basis there is not going to be much impact. But if you need 100 people inside fitting out and installing complex equipment the reduction in headcount will reduce productivity.”

He said unions representing workers have received positive feedback from 90 per cent of workers since the reopening of sites. The Health and Safety Authority have “carried out dozens of inspections” on sites since Monday when some construction sites reopened as coronavirus restrictions eased, according to Mr Parlon.