Cork teenager says negotiators ‘not putting value on our lives, our countries, our futures’ 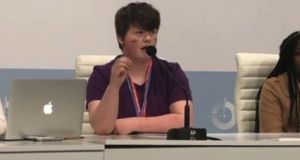 Saoi O’Connor speaking at a FridaysForFuture press briefing at COP25. She says she had dedicated her life to the climate crisis

One of Ireland’s first student climate strikers has accused member nations at the UN climate talks of failing to take on board the profound worry of young people about the fate of the planet,

In a blistering attack, Saoi O’Connor said powerful countries were pursuing a course that was deliberately confusing to hide lack of action.

Speaking at a FridaysForFuture press briefing at COP25, the teenager from Skibbereen, Co Cork, said negotiators “are not putting value on our lives, our countries, our futures”.

Instead, big wealthy countries, responsible for by far the most carbon emissions, were attempting to ensure they continue to live comfortable lives while pursuing “a system of carbon trading to make them look good”.

Ordinary people attending the COP were incredibly confused and alienated from the process because “it’s all article 6.4, whatever it is. It’s incredibly jarring; the amount of jargon thrown around in here,” added the teenager who has been protesting outside Cork City Hall on Fridays for almost a year.

Article 6 of the Paris Agreement is about trading carbon, she noted. “Essentially, I offset some of my carbon so that you can burn more. Effectively, the countries that are here, despite what they’re talking about, despite their wonderful speeches – truly wonderful speeches – still thinking that our past, present and future is something that can be bought and sold. And I don’t think we’re going to take that.”

Speaking afterwards to The Irish Times, she said fellow striker Alexandria Villasenor from New York had protested for months with a poster saying, “COP24 failed us”.

“That is pretty much right. That is what COP25 is going to do,” she added.

“The real COP is on the streets. The power is with the people – they are redefining politics.”

She confirmed Greta Thunberg, a friend, was always talking about coming to Ireland. But after three weeks on the Atlantic, she believed the Swedish teenager probably wants to go home and see her family and dogs – including Roxy, rescued from a pound in Cork some time ago.

Irish people “have a big appetite for what she has to say”, she added, though schools strikes had already achieved “an attention shift on the climate issue”.