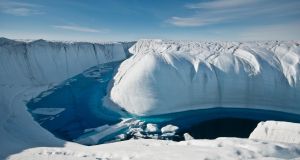 A meltwater canyon on the Greenland ice sheet. Around 400 million people would be exposed to coastal flooding every year by the end of the century if Greenland continues to lose ice at its current rate, scientists have warned. Photograph: Ian Joughin/PA

Ireland is to join an alliance of countries throughout the world committing to higher ambition on climate actions, notably in reducing carbon emissions.

Minister for Climate Action and Environment Richard Bruton who is to deliver Ireland’s “national statement” at COP25 on Wednesday, confirmed Ireland is to join the Carbon Neutrality Coalition (CNC). It includes countries with the most ambitious decarbonisation targets – notably Scandinavian countries along with France, Germany, the UK and Canada.

Speaking from Madrid, Mr Bruton said: “Climate disruption is the biggest challenge of our time. It requires an unprecedented level of international co-operation. I believe it can be done and Ireland is determined to play its part. We are now implementing the climate action plan which will ensure we meet our future climate commitments, putting us on a trajectory to be net-zero emissions by 2050.”

The Minister will participate in high-level negotiations as final elements of the Paris Agreement rulebook move towards finalisation by signatory countries.

“By joining the neutrality coalition we commit to develop the roadmap for 2050, to embed this goal in every element of policy, to mobilise citizens and enterprise and to work with other countries for concerted effort. The world is watching. We must catch this historic tide in the affairs of mankind,” he said.

On young people raising their concerns about the climate crisis, Mr Bruton said, “In September Ireland led a UN Youth Forum on Climate at the UN Climate Action Summit in New York - 140 states and over 1,000 young people took part. The message was clear. Act now so we don’t rob young people of their inheritance, and empower new ideas.”

Since then Ireland had mobilised the 2020 budget behind the Government’s climate action plan, he said.

He also confirmed Ireland’s support for the Niulakita High Ambition Declaration on Shipping which promotes measures to reduce emissions from the maritime transport sector by at least 40 per cent by 2030 and at least 70 per cent by 2050 compared to 2008. But he stressed, “all sectors must step up and decarbonise to secure the kind of radical change that is needed.”

Ireland was also signing up to a multi-annual pledge to the Green Climate Fund which helps developing countries make the transition to carbon neutrality, “doubling our annual commitment during this period, with a total contribution of €18 million for the period 2019 to 2023. This is in addition to €196.7 million international climate finance contributed from 2016 to 2018 to developing countries”.

An additional €3 million in 2019 would go to “least developed countries” which focuses support to those most vulnerable to climate change.

“As we look to increase climate ambition it is crucial that we support those who will find it the most difficult to make the transition Ireland is doubling our annual contribution to the Green Climate Fund in addition to the €80 million international climate finance Ireland contributed in 2018 to support developing countries for climate action measures,” he said – This funding will go towards providing technical expertise and helping developing countries adapt to the impacts of climate disruption.

Ireland “remains fully committed to implementing the objectives of the Paris Agreement”, he stressed. The climate plan would ensure Ireland reached it 2030 emissions targets “and puts us on a trajectory to be net zero emissions by 2050”.

The “high-level segment” of the summit kicked off on Tuesday with reminders that the international community was running out of time to effectively tackle the crisis “and must change course and step up ambition in order to prevent the worst climate impacts”.

Speaking at the opening, Petteri Taalas secretary-general of the World Meteorological Organisation pointed out his organisation had published two climate statements this year, “and they are not good news”.

“Global warming continues. The average global temperature has risen by about 1.1 degrees since the pre-industrial era and the ocean has warmed by half a degree. Some 220 million people suffered from heatwaves last year. We have started seeing growth in hunger once again. Now we have more than 800 million people suffering from lack of food,” he said.

COP25 president and Chile’s environment minister Carolina Schmidt warned droughts, fires and floods were hitting people in her region in Latin America and the Caribbean, with the most vulnerable being the hardest hit.

“This conference must change the course of action. A change of course in ambition by bringing new actors to the table: regional, local and city governments and both the productive and financial sectors. Because action is not, and should not be, just a political issue. National commitments are necessary but not sufficient. No one can be left out,” she added.