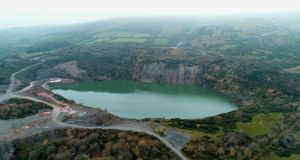 The lower reservoir in Silvermines already exists at the site by way of an open-cast mine flooded to a depth of some 70 metres at the foot of Silvermines Mountains.

A proposal to build a large hydro-electricity plant in the Silvermines mountains in North Tipperary has received a significant boost after it was included in a strategic plan to develop Europe’s electricity grid over the next decade.

The €650 million energy storage project is the only electricity generating plant planned for Ireland included in the European Network of Transmission Systems Operators for Electricity (ENTSOE) plan for 2018 to 2028.

The plant would be one of the largest private infrastructure projects in the history of the State and generate 360 megawatts of electricity.

It is similar in design to Ireland’s only “pumped-storage hydroelectricity plant” run by the ESB’s at Turlough Hill in Co Wicklow.

A cost-benefit analysis conducted by ENTSOE has confirmed the benefits to Ireland from the project. It has the capacity to generate electricity for 200,000 homes and be worth €80 million a year in economic dividend.

“This will be achieved through a reduction in carbon emissions, more efficient integration of renewable energy and the cost of electricity production,” according to ENTSOE.

Tánaiste Simon Coveney welcomed the inclusion of the project by ENTSOE, following a visit to the site.

“This is a potentially hugely significant project for the country and also for Tipperary,” Mr Coveney said.

An additional benefit from the development would the rehabilitation of the site. It is one of a number in the Silvermines mountains where there have been on-going environmental concerns since mining ceased in the early 1990s.

The EU designation is major validation for the project as it essentially identifies it to be of national and EU importance when it comes to decarbonising the environment.

Environmental assessments to underpin the planning application have commenced, with a formal planning process set to start in the latter half of next year, said a spokesman for the developers Siga Hydro, which is an Irish clean energy development company.

Work on the project would commence in 2022, subject to planning, with a four-year construction phase.

The pump-storage facility is set to displace electricity generated from fossil fuels at some of the country’s high-carbon emitting plants, he added, and in the process help achieve Government targets for CO2 reductions.

“And it will help balance the national grid by ensuring a brand new and completely green electricity supply source to cover outages and electricity demand spikes,” the spokesman said.

The storage-based technology uses water from a higher elevation reservoir to flow through giant turbines, generating electricity in the process, before being collected in a lower reservoir.

Water is then pumped from the lower reservoir to the higher reservoir during low-electricity demand periods.

The lower reservoir already exists at the site by way of an open-cast mine flooded to a depth of some 70 metres at the foot of Silvermines mountains.

Tipperary TD Alan Kelly said: “This is essential for the future of Ireland’s energy needs. We have to change the way we deliver energy and bring about energy. And this is central to doing that. It is a very important project because this is a contaminated site. So not alone are we creating a pump storage facility, this site is going to be cleaned up as part of it.”