Hottest day of year as temperatures reached 28.6 degrees in Dublin 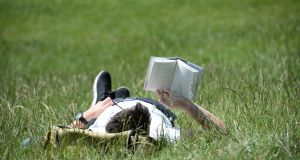 Reading a book during the heatwave in the Phoenix Park in Dublin. Photograph: Dara Mac Dónaill/The Irish Times

It’s official. Wednesday was the hottest day of the year so far, Met Éireann has confirmed, with temperatures reaching 28 degrees in Dublin.

The capital was the hottest part of the country with temperatures in the Phoenix Park topping out at 28.6 Celsius, the highest temperature recorded in Ireland this year.

The rest of the country made do with cooler weather. In Kerry the maximum temperature was just over 17 degrees.

The maximum temperature in Galway was 19 degrees. In Donegal it was 18 degrees and in the midlands it was about 21 degrees.

Met Éireann said it is 40 years since Ireland has experienced such a heatwave during June. A heatwave is defined as five consecutive days when the temperature is five degrees above normal. The normal peak temperature for this time of the year is 16 to 18 degrees but in the last five days, temperatures have often been in the mid-twenties.

However it looks like the heatwave is over. Met Éireann has predicated an average temperature for the rest of the week of between 17 and 20 degrees throughout the country.

Temperatures are expected to drop slightly on Thursday and to remain between 16 and 22 degrees.

Met Éireann has said the dry and sunny weather will cause a large increase in grass and weed pollen in the air, meaning hayfever sufferers may see their symptoms flare up this week.

Saturday is anticipated to be breezy and dry, with temperatures between 14 and 18 degrees nationwide.