Call for managed and just transition from fossil fuels 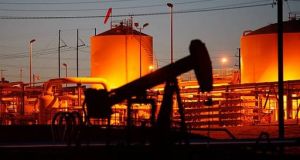 Those calling for the State to divest from the fossil fuel industry do not expect the transition to happen overnight, an Oireachtas committee was told.

“We do not want a cliff-edge but rather a timely, managed and just transition that puts the most vulnerable globally, as well as vulnerable households, communities and workers in Ireland, at the centre of concern,” Finola Finnan, deputy director of the aid agency Trócaire, told a Dáil committee which is considering a Bill calling for the divestment of public money from the fossil fuel industry.

“The cliff-edge we must avoid, however, is that of failing to deliver on the Paris agreement [on reducing emissions of greenhouse gases], and that means stopping the expansion of the fossil fuel industry and stepping up the pace of the phase-out.”

The Fossil Fuel Divestment Bill is a Private Member’s Bill introduced by Independent TD Thomas Pringle. It proposes to amend the National Treasury Management (Amendment) Act 2014, instructing the agency to divest the Ireland Strategic Investment Fund (currently under the remit of the agency) of its assets in fossil fuel companies, and to prohibit future investments in the industry.

The Bill passed an initial Dáil phase in January, and has come before the Oireachtas Committee on Finance, Public Expenditure and Reform for consideration.

Historical evidence shows that divestment, even on a significant scale, does not result in the dissolution of an industry, Ms Finnan said. “What every divestment campaign to date has done successfully is to shift public and political opinion, leading to changes in government policies, market norms and investment principles.”

She said the vast majority of existing fossil fuel reserves must remain unburned if the world was to deliver on the temperature limits set out in the Paris agreement. If commitments were not honoured, it would “make the Sustainable Development Goals that Ireland led the way in negotiating in 2015 impossible to achieve, and global poverty, hunger and inequality will be exacerbated significantly”.

She said in stark contrast with its strong reputation for responsible multilateralism and commitment to global poverty eradication, Ireland was consistently failing to deliver on its commitments on climate change.

“And Ireland cannot hide behind its small size and population. According to Ireland’s Environmental Protection Agency, Ireland has one of the highest levels of greenhouse gas emissions per person in the world.”

Outlining the benefits of green energy, Mr Bond said the case for divestment from fossil fuels was both a moral and a financial argument.

He predicted peak fossil fuel usage would be reached by 2020; far sooner than had been anticipated. This had significant consequences for the coal industry and Europe’s electricity sector – and very soon on oil and gas, which so far have been immune to the consequences.

His divestment message was to get out of fossil fuel: “you are going to lose money if you carry on holding assets in fossil fuel companies”.

Ireland, he added, had huge natural wind resources relative to population; so much so that even today it was “a European super power” in this renewable energy source, with an opportunity to leverage electricity generated from this source into transport. If it could adapt its approach to renewables faster that its neighbours it would secure “enormous relative benefits”.