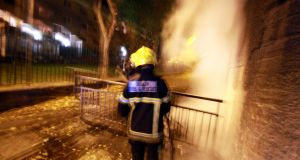 New fire safety regulations coming into force next month will include enhanced provision for detection and alarm systems, and revised guidance on safety in community dwelling houses.

The overhaul of all fire regulations has been in train for sometime and will include appropriate use of cladding in separate regulations. But the Department of Housing Planning, Community and Local Government has said it “has no knowledge of the type of cladding used in the Grenfell Tower renovations beinged in Ireland”.

The external use of composite foam insulation is believed to have contributed to the rapid spread of the fire at the residential block in Kensington that has claimed at least 58 lives in the London tragedy, with many more residents still missing.

The new regulations will also strengthen guidance on timber frame construction, including new provisions in respect of timber frame party walls between housing units; addressing issues raised by Irish fire safety experts on foot of the circumstances of a fire in such a development, and evidence of defective construction in some estates.

There will also be “enhanced provisions in respect of loft conversions and new provisions for galleries in dwelling houses”, the department confirmed.

Work is “at an advanced stage on preparation” of revised regulations on buildings other than dwelling houses.

Once this has been completed, the regulations will be published for full public consultation. Requirements and guidance on construction of and materials used in external walls of buildings, including high rise buildings, will be included.

Foam insulation similar to that used on the exterior of Grenfell Tower is both manufactured in Ireland and used often by construction companies – though usually as an internal insulation, which is permissible, according to fire safety experts.

The Irish Fire and Emergency Services Association said, however, there were “clearly very many questions to be answered in the relation to the circumstances of the [Grenfell] disaster, but the issue of the risks posed by ‘cladding’ is one that has concerned fire fighters, and has been raised at EU level by the European Fire Fighters Union Alliance”.

The department insists current regulations provide guidance on external wall construction in relation to internal and external fire spread. It said there is an overarching requirement that all works should be carried out using “proper materials . . . which are fit for the use for which they are intended and for the conditions in which they are to be used” to ensure compliance.

Separate to the use of inappropriate over-cladding, the Grenfell fire is “a wake-up call for Irish authorities that are failing to address serious fire safety concerns in Irish housing developments”, according to Fingal County councillor Cian O’Callaghan. There was evidence of inadequate “fire stopping” between timber frame housing units, particularly in developments built during the Celtic Tiger era.

This posed a risk to current occupants, he added. In most instances, the units of concern were in housing estates, though some apartment blocks were involved, he claimed. “Several housing estates in Dublin and wider Leinster, including a number of timber frame developments, fail to meet basic fire safety standards.”

Cllr O’Callaghan called on the Government to publish a review into fire safety and timber frame developments commissioned after the rapid spread of fire in March 2015 at Millfield Manor, in Newbridge Co Kildare, which destroyed six terraced houses.

The independent fire safety expert has completed this task and a report has been received by the department. It “remains under consideration pending clarification on a number of issues at which point it is intended that the arrangements necessary for publication will be made”, a department spokesman said.