Dog owners stage a protest in Malahide, Co Dublin against a new bylaw introduced by Fingal County Council requiring that dogs are kept on a leash unless in designated off-leash areas. 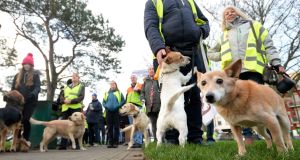 Fingal Dog Owners Group, in Malahide Co Dublin over the weekend ahead of the protest march calling on Fingal County Council to reverse the new restrictions for dogs in public parks. Photograph: The Irish Times

Chants of “no lead, no problem” echoed around Malahide at the weekend as more than 100 dog owners marched through the north Dublin village in protest at regulations imposed by their local authority.

The demonstration was organised by the Fingal Dog Owners Group, which says it is pushing back against a “restrictive and discriminatory” Fingal County Council bylaw requiring dogs to be on leashes in public parks between 11am and after 6pm, except in designated zones.

The council says bylaw 4.7 was a response to “reports of serious incidents involving dogs in Fingal’s public parks” which local officals said included people being bitten or scared by dogs in public spaces. It sees dog-owners fined if they do not comply.

The group was founded as a response to the law and has grown to have some 1,400 members on Facebook.

Most of those who attended the march said they understood the point of the restricted-hours policy but adequate lighting should be installed for walkers’ safety during those times.

However, they feel the designated areas rule means they are being forced into “caged pens” with their animals. Steel structures in which dogs can go ‘off leash’ are being erected in some of the area’s larger parks.

Dermott Byrne, the owner of a Collie-cross named Otto, said he believed the law was more to do with raising revenue than anything else.

“If you remove the dog owners from the parks, the vacuum will be filled with anti-social behaviour,” he said.

“I walk a dog to relieve stress. It’s good for your mental health...But when you’re constantly looking over your shoulder it’s no longer enjoyable. The council is driving dog-walking underground.”

John O’Callaghan, who organised the march, claimed the bylaw was “totally unnecessary”.

“This has absolutely nothing to do with dogs,” he said. “Dog owners are the largest public users of the park, we would be aware if this [attacks] was a problem.”

The group says it made a Freedom of Information request to obtain records of all dog-related attacks in the Fingal area for the year 2017. The response stated that 83 had been reported, although it was not specified if the victims were humans or animals. None of the incidents listed occurred in a public park, with housing estates the most common location for the attacks.

“We were absolutely confident that there was no proof (to justify these measures),” said Mr O’Callaghan.

Vanessa Hartford , who has Multiple Sclerosis, says she is unable to walk the uneven fields to reach the designated ‘off-leash’ area in Malahide Castle Park.

“The field they want us to walk through is not accessible. They preach about health and safety, but there is nothing safe about that,” she said. “Older people will lose their balance trying to walk across that with their dog on a leash.”

Ms Hartford uses a stick when walking and says that managing a dog on a leash is a struggle. “I walk my dog every day, and it is essential that I do that.”

Catherine O’Leary (45), who was kitted out in pup-patterned leggings for the occasion, said the bye-law posed a “big problem”.

Ms O’Leary’s eight-year-old son, Tom, was born with a chromosomal disorder and she says only learned to stand by leaning his weight on their service dog, Gerri.

“We thought Tom would never walk and then Gerri helped him to his feet,” she said. “It’s just an inconvenience to hold a lead and a buggy. It’s really unfair on people with disabilities not to be able to let their dog off the lead.”

Ms O’Leary added: “I won’t let them take this away from us. It’s too important.”

The council said the bye-law was adopted to “to reflect the needs of all of Fingal’s park users” and aims to “make parks and open spaces safer, cleaner and more enjoyable for everyone”.

Council officials met the dog owners’ group in December to “discuss their concerns” and brief them on the council’s plan for “extensive provision of dedicated dog-off leash areas and facilities in Fingal”. A further meeting is planned.