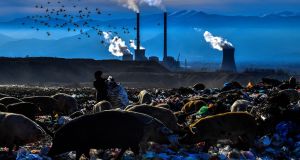 Pigs feed at a landfill site in front of a power station near the city of Bitola in the Republic of North Macedonia. Photograph: Georgi Licovski

“Blatantly inadequate.” That is how the 2019 United Nations Environment Programme (UNEP) report describes current international governmental plans to reduce greenhouse gases, compared to what is needed to achieve the commitments they have made to keep global warming to 1.5 degrees over pre-industrial levels by 2050.

UNEP analyses this “emissions gap” between actual policies and political commitments in decades, using 2030 as the crucial reference year to assess progress made against climate breakdown. They calculate that five times the current decarbonising policy effort is needed to achieve the 1.5 degree goal adopted in the Paris Agreement four years ago, or three times for the less ambitious and more dangerous 2 degree one. Based on current policies, the Earth is set to warm by a disastrous 3-3.5 degrees in 2100.

Going into the 2020s, we can see the effects of losing the last decade. Had effective action been taken from 2010 to achieve the 1.5-degree target, an annual reduction of 3.3 per cent would have been required compared to 7.6 per cent now. Environmental scientists say 20 or 30 years have been lost in this struggle even though it was known to be necessary from the 1990s. Emissions actually grew by an average 1.5 degrees per annum in the last decade.

The UNEP report highlights the role of fossil fuels and especially coal in causing global warming. Major states like China, India, the US and Japan have variable records on expanding or cutting coal and oil consumption, while the EU bloc has a better record. But current Chinese and Indian expansion plans for coal and the recent capitalisation of Saudi oil resources at nearly two trillion dollars show how difficult it will be to turn this tide.

About 100 energy companies are responsible for an estimated 70 per cent of the world’s greenhouse gas emissions since 1988. In 2016, the Inter-American Development Bank declared energy companies were facing the potential loss of $28 trillion as a result of the need to keep fossil fuels in the ground. Given such fundamental interests and how they wrap up asset values for the richest people, reversing these trends is a huge task threatening the existing capitalist economic order.

School children, the young and indigenous peoples use their knowledge of nature to resist encroachments as a new spirit of rebellion emerges

The year 2019 has seen a real radicalisation of international movements tackling the climate crisis. New methods and social movements became more centrally involved, as school children and young people took up the case on behalf of their own generation, indigenous peoples used their knowledge of nature to resist encroachments and a new spirit of rebellion emerged alongside previous lobbying and political techniques.

A group of more than 150 Irish academics justified their support for direct action and peaceful protest by Extinction Rebellion in the following way: “When a government wilfully abrogates its responsibility to protect its citizens from harm and to secure the future for generations to come . . . it is . . . perfectly reasonable that concerned citizens would bypass the government’s flagrant inaction and rebel peacefully to defend life itself.”

Failure of the climate conference in Madrid last month alongside dramatic footage from Australian fires and news that Greenland’s ice is melting seven times more rapidly than in the 1990s bear out such warnings and the proclaimed right to rebel. The coming decade will be more turbulent and eventful as a result.

The UNEP report enumerates positive potential change, together with its bleak account of failing policies. “Decarbonising the global economy will require fundamental structural changes, which should be designed to bring multiple co-benefits for humanity and planetary support systems.”

Such desirable outcomes are difficult to reconcile with the vested interests on display, the power systems supporting them and the short-termism of electoral cycles. Extinction Rebellion and other activists face this issue with demands for a just transition and a green new deal to compensate victims and mobilise support.

In doing so they raise awareness of the dangers involved. As Greta Thunberg told the United Nations in September: “Right here, right now is where we draw the line. The world is waking up. And change is coming, whether you like it or not.”

1 Taoiseach claims Sinn Féin not ‘a normal political party’
2 52 places to go in 2020: Here’s where the New York Times says you should visit
3 Who are Ireland’s 17 billionaires?
4 Yacht captain guilty of drunk sailing had ‘God given right’ to be on Liffey
5 Over 65s are expected to ‘crawl into corner and die’, says election hopeful Valerie Cox
Real news has value SUBSCRIBE