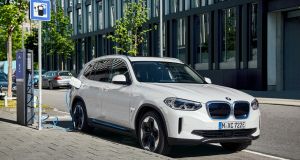 BMW’s fully-electric crossover, the iX3, is promising an official range of 460km on a single charge of its 80kWh battery pack

BMW’s fully electric crossover, the iX3, is promising an official range of 460km on a single charge of its 80kWh battery pack. And that’s just the start of its latest electric offensive: next year will also see the arrival of the larger BMW iNext SUV and a sporty four-door gran coupe, the i4, both promising a range of over 600km on a single charge. By 2023, the Bavarian car brand promises at least 12 fully electric cars will be on sale, along with 13 plug-in hybrid vehicles.

Unlike rivals, BMW is not abandoning the fossil fuel engine range. Instead, it is embracing hybrid – up to a point. All future petrol and diesel versions will be fitted with a 48-volt mild hybrid system, but that the future for hybrid is in plug-in technology, not the so-called “self-charging” format favoured by Japanese brands.

At a presentation this month BMW executives presented figures, based on fuel and electricity rates in Germany, claiming a commuter driving an X2 plug-in hybrid and doing 35km each way on weekdays could save €812 a year compared to a regular petrol alternative. Even compared to diesel alternative, there’s a saving of €83 a year.

With the revamped 5 Series getting the plug-in hybrid option, a new 12 KWh battery packs claim a range of up to 60km on electric-only power for the 530e saloon.

BMW is adding new features to its plug-in hybrid models. For example, it is rolling out a new “eDrive Zones” feature that automatically switches to full electric mode when it enters designated city areas. While it’s not going to be initially operational in Ireland, it means the tech is in place when authorities here make the call.

As for the new iX3, due to arrive in showrooms by the middle of next year, it is the German car brand’s second fully electric BMW to arrive on the market, following on from the current i3 supermini. It also has a fully electric version of its Mini on sale.

Similar in stature and size to the regular X3 SUV, telltale signs like the closed front grille and various blue-toned features signal that it’s the battery-powered version. While it may look like an SUV, the iX3 will be rear-wheel drive only with power delivered from an electric motor mounted on the rear axle and delivering 282bhp.

As with many all-electric models, acceleration is going to be impressive, particularly for a car of its size. BMW claims a 0-100km/h time of 6.8 seconds, with top speed limited to 180km/h to preserve range. The company also claims that by integrating the battery packs into the car’s floor, engineers have lowered the centre of gravity by 75mm compared to a regular X3, which means it should be even sharper to drive.

The new iX3 will also be a landmark model for another reason: the first time one of its cars will be built in China for export. What president Trump will make of that remains to be seen.

But it does make business sense to build for export from the Asian giant, and in these trying times finances are in focus for everyone, including the Munich car giant, which posted a record loss for its car division in the second quarter after sales slumped 25 per cent because of coronavirus lockdowns. Sales had started to recover during the latest three-month period, including a 17 per cent jump in deliveries in China, but the rebound would not fully make up for sales lost to Covid-19.