Will coronavirus convince us all to buy campervans?

As interest in campers swells in Britain, Volkswagen reckons there’s an Irish opening too 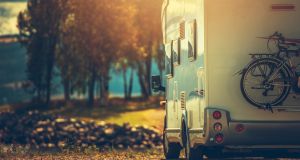 ‘The idea of holidaying in a space that you yourself own, which you can clean yourself and which won’t have been used by others recently, is definitely reassuring.’ Photograph: iStock

As we slowly start to emerge from our shells, as (hopefully) coronavirus recedes, those of us lucky enough to still have an income and work to do will start, inevitably, to think about holidays. It looks as if one smart option will be to take a staycation, although I’m going to be nervous as hell for some time to come when it comes to literally laying my head on someone else’s pillow, so hotels and Airbnbs are going to be something of an issue. Which then raises the potential of bringing your own home with you . . .

Caravans are out of the question, obviously. They’re big, they’re ugly, they’re awkward to tow, and you just end up looking and feeling like a couple in a dodgy 1970s sitcom. A campervan, though? Well, that’s maybe a better idea. Instead of looking like Terry & June, you might end up looking a little mot more like Owen Wilson, all surfer-chic and board wax. Well, maybe.

It seems as if this is coming to pass. In the UK market, Auto Trader is reporting a rise in people viewing online adverts for campers – up by 17 per cent compared to last year – while a survey showed that 40 per cent of people are planning a staycation this year (regulations allowing) and that plans for caravan and motorhome holidays are as popular now as those which involve hotel stays.

The idea of holidaying in a space that you yourself own, which you can clean yourself and which won’t have been used by others recently is definitely reassuring

Auto Trader’s Rory Reid told The Irish Times: “Coronavirus has changed the way we live our lives in so many ways, and there’s no doubt this will extend to our holidays. Many are unlikely to want (or be able) to quarantine themselves for 14 days after a holiday abroad, so we’ll be seeing beaches and other hotspots abuzz with local holidaymakers this summer. Caravan holidays in particular will shoot through the roof. The idea of holidaying in a space that you yourself own, which you can clean yourself and which won’t have been used by others recently is definitely reassuring.”

Volkswagen Ireland reckons that there’s a potential opportunity here for campervan sales too, VW is one of only three brands that offers in-house camper models (the others being Ford and Mercedes). Volkswagen Commercial Vehicles Ireland director Alan Bateson told The Irish Times: “It’s something that maybe can work for people as they do not want to travel by plane, They do not want to travel to other countries, possibly, they can still make the best of our beautiful country by utilising the class leading products that we have in the caravan segment vehicles.

“So we have an opportunity and we are looking at production about standard California and Grand California, two brand new models that are well priced into the Irish market and provide options for customers we’re already seeing an increase in inquiries for these vehicles from certain customer groups.”

In fact, as of this week, Volkswagen’s camper sales were up 25 per cent overall, compared to 2019, and had risen a staggering 1,000 per cent since the 18th of May, when dealerships reopened. “We have managed to gain a further additional 15 production slots in July, August and September so we expect to see these numbers continue especially with the launch of California Beach model,” Bateson said. “We have also seen circa 5 per cent increase in residual values as used models are also heavily sought after.”

Mercedes in the UK is seeing a similar effect. Speaking to Car Dealer Magazine, Mercedes-Benz Vans managing director Steve Bridge said: “If you look over the last 10 years the leisure market has been on the increase irrespective. So, yes, you’ll get the odd blip – like around 9/11 when people didn’t want to fly – but there are many people that like to stay in the UK, and certainly travel to Europe as well.”

So can you have a fun holiday in a campervan? Well, helpfully we’ve tested a Volkswagen California to find out and the results are . . . mixed. The California is based on the Transporter van, as it has been since the first classic camper models were launched in all their chrome and curved-glass glory in the 1950s. A van being a big box with wheels means you can start throwing in furniture cupboards instead of boxes, and so the basic California Coast comes with a small fridge, kitchen cupboards, tanks for drinking and waste water, a two-burner gas cooker, and two double beds. The back seats fold down to form one bed, while the other is in the pop-up roof that allows you to stand up in the back. Our test car was a high-spec Ocean model with two-tone paint, an electric pop-up roof, an awning, and the top-spec 204hp diesel engine with 4MOTION four-wheel drive.

Now, that doesn’t make it quick. All the weight of beds, cookers, roof etc means that it feels a touch ponderous to drive, although it’s never difficult, and because it’s based on the relatively compact Transporter, you can get it in and out of town, and even in and out of multi-storey car parks, with relative ease.

Park up, push up, and unpack and you do have a rather nice living area. A kitchen table unfolds from beside the back seat, the front seats swivel around, and as long as it’s a dry day and you can get the awing out, it’s all rather pleasant.

The clever fold-out camping table and chairs (which store in the sliding side door and the tailgate panel respectively) are helpful, and there’s no end of fun to be had playing campervan Tetris and figuring out how to stow and unstow all of the various bits and pieces. Okay, so there’s no on-board loo (you have to upgrade to the much bigger Crafter-based Grand California for that and, frankly, you should because it’s an awesome vehicle) but with 4MOTION you can get far enough into the woods for that not to be a major issue . . .

Problems? Well, for all the inherent roominess of a Transporter, space inside can be an issue. It’s a strict four-seater, which limits how many of you can travel, and when you’re divvying out bed space, you need to choose carefully who’s going to be your sleeping partner. My kids (nine and 14) are actually getting too big now for sleeping alongside them to be truly comfortable.

Then there’s the cost – even the basic Beach model will set you back a (sharp intake of breath) substantial €55,905 while the bigger Grand California costs a whopping €77,795. Of course, into that you have to factor the sheer versatility of these cars (where are you going to find a two-bed apartment of this kind of quality for €60,000 to 80,000?) but still, they’re not cheap. Then again, neither will foreign holidays be for some time to come, so maybe it’s time to invest in a camper after all.

Danbury Type 2 Rio
New California too pricey? Well, what about the original, curvy-fronted VW Campervan? This one, imported from Brazil by UK-based specialists Danbury, uses a modern VW 1.4-litre engine, and has a gas hob and grill, a fridge, and a double bed. All for the equivalent of €30,000, and if you look after it it probably won’t depreciate.

Lorinser Puch G Camper
This one is for the serious isolationists. Lorinser Classic is a German-based company that specialises in restoring classic Mercedes models, and – oddly – ex-Swiss Army G-Wagens. This one has been converted to a luxury camper with a double bed, fridge, and microwave, and even has solar panels on the roof for electric power when you’re out in the boonies. This one costs a chunky €69,000 but the donor vehicle can be bought for just €15,000 and fold-away beds and sleeping bags are cheap.

Talbot Camper
Did someone say cheap? Well, with its €2,000 price tag, you won’t find cheaper accommodation than this, a Talbot Camper with a pop-up roof. As with any form of cheap housing, this one’s a fixer-upper, and frankly the interior probably needs to be torched with a flamethrower, but right now it’s the cheapest step on the camper ladder.