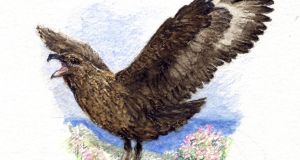 Birds, too, have their bullies, muggers and thieves. Seagulls, some of them, snatch ice-creams and sandwiches from human fingers. I once watched a raven harassing an otter in the dunes, attempting to drive it from eating its freshly caught flounder.

On the global scale, nearly 200 species turn pirate at some time or other. But the arch-kleptoparasite now colonising our wilder western islands has piracy and murder bred into its genes.

The great skua (in Scotland, the “bonxie”) is the north Atlantic’s top predator, with a special stronghold in the Shetland Islands. Its population burgeoned by pouncing on fish discarded by trawlers or seized from flying gannets in mid-air tussles. Bonxie colonies began to spread south in Scotland’s western isles.

The balance of mid-air piracy, surface fishing and avian prey has been uncertain, even within colonies. A small minority of great skuas are considered specialist bird predators, but a new dearth of sand eels has turned even more skua appetites to chicks snatched from cliff-ledge nests.

At a fast-growing colony on remote St Kilda, a 1996 study estimated that the skuas consumed 40,800 seabirds of seven different species. And in 2015, at the Shetland island of Hermaness, the BBC filmed a group of great skuas drowning and eating puffins.

This followed publication of a scientific study, using the skua’s regurgitated pellets of bones and feathers, that showed a toll of adult puffins, along with the chicks of guillemots and razorbills and many kittiwakes.

On St Kilda, the birds have begun hunting by night to prey on storm petrels returning to their nest burrows. Steve Newton, BirdWatch Ireland’s bonxie expert, has wondered if the petrel colonies on Ireland’s western islands have helped expand the skua’s spread of colonies.

It was 20 years ago that Newton, with a seabird survey team, first found himself attacked by diving skuas on one of the islands that line my Mayo horizon. In 2001 a nest was found, complete with downy chick. A few summers later, on another “empty” island, 20km from the first, I had my own binocular view of nesting skuas (at a cautious distance and on my knees – they are really not to be annoyed).

By 2010 breeding was reported in Northern Ireland on Rathlin Island, and pairs were prospecting the high cliffs of Donegal. But the main expansion has been further south in Connacht.

The latest surveys for the National Parks and Wildlife Service found breeding confirmed at 13 sites, and Newton guesses at an Ireland-wide minimum of some 25 pairs of birds.

After adopting Connemara’s Inishark and Mayo’s Inishturk and Caher, the first skuas were seen prospecting the Clare Island clifftops in 2015. Breeding was confirmed in the following spring.

A new report on the island’s birds, just published by the Royal Irish Academy, thinks the arrival of the predatory skuas “may prove to be a major development in the history of the seabird fauna of Clare Island”.

This is Volume 9 of the New Survey of Clare Island, the RIA’s great ecological reprise of the pioneering survey of the island’s flora and fauna, the brainchild of Robert Lloyd Praeger in the early 1900s. Edited by Dr Thomas Kelly of UCC, it draws on 20 years of fieldwork by a wide range of contributors.

Including the great skua, Clare can claim 14 species of seabird, having lost the terns of Praeger’s day but also gained the fulmar, common gull, cormorant, lesser black-backed gull and – substantially in recent years – the gannet.

It is among the land birds, however, that the greatest changes are apparent, their variety so closely tied to social upheaval, led by the Famine, and changes in land use and vegetation.

As Kelly surmises, only the rock pipit, dunnock, wren and reed bunting have survived continuously the 8,000 years of Clare Island’s separation from the mainland. The end of arable farming and overgrazing by sheep have brought the relatively recent extinction of corncrake, yellowhammer and twite and the loss of heather an end to the once-plentiful woodcock.

The report gives a chapter to the fact that Clare has no colony of breeding rooks, even in its small surviving wood, and nor does any other offshore Irish island. Comparison with those off Scotland suggests that size is what matters, and the area of even Ireland’s biggest islands is 10 times too small to support a rookery.

Clare’s most numerous bird in a 2013 census was, remarkably, the northern wheatear, beautifully portrayed on the volume’s cover. This migrant from Africa, feeding on ground insects numbered almost 1,800 individuals, greatly more than all other land birds except the resident meadow pipit.

The intense grazing by sheep, leaving large stretches of Clare nibbled to the nap, may account for such exceptionally high numbers. Even the native chough, for which Clare’s close-cropped cliffs are also thought a refuge, could number less than 100 in the census estimates of 2013.