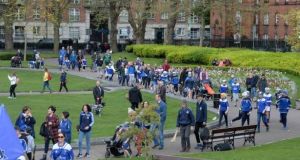 A group of hurling and camogie players protested in May at the lack of green space in Dublin 8 after Templeogue Synge Street GAA Club proposed redeveloping part of Dolphin Park to accommodate 161 homes. File photograph: Dara Mac Dónaill.

The construction of more than 160 apartments and townhouses on GAA club lands in Dolphin’s Barn, Dublin has been approved by An Bord Pleanála.

The board has overturned a Dublin City Council decision to refuse permission to Templeogue Synge Street GAA Club to build 153 apartments, seven townhouses, and one house on its lands at Dolphin Park close to the Grand Canal.

More than 160 objections had been lodged with the council in relation to the loss of green space and playing fields in the area.

Local residents, politicians, and hurling and football clubs that use the grounds had said almost 30 per cent of the green space on the site would be lost, which would jeopardise the future viability of local sports clubs.

Players from Kevin’s Hurling and Camogie Club and hundreds of locals last May held a “flash mob” protest in St Patrick’s Park against the development.

Templeogue Synge Street GAA Club said the residential development would occupy 15 per cent of Dolphin Park and was necessary to fund the planned upgrade of the playing and dressingroom facilities, which would benefit the wider sporting communities of Dublin 6, 8 and 12.

In its application to the council, the club said it had obtained permission in 2006 for a “similar development” of 100 homes. However, due to the economic crash it failed to secure a development partner and the club was left with debts of more than €1 million as a result. It said this debt had left the club in a “very difficult position” and made it impossible to carry out any capital investment in its facilities.

The council had said the building on amenity lands was only permitted in “highly exceptional circumstances”. The scale and mix of the uses proposed at the site, and the loss of “the city’s green infrastructure, in an area already deficient in green space” would be contrary to development plan policies, it said.

The development would also cause traffic problems, risks for pedestrians and cyclists, and would adversely impact the future operation of Bus Connects Services.

However, the board determined the development was in accordance with development plan policies and would be “satisfactory in the context of traffic safety and convenience”.

Separately, the board has granted permission to Bartra Properties to build a 155-bed four-storey nursing home and a 14-bed retirement home on the grounds of the Presentation Sisters’ convent in Clondalkin village.

The Save Clondalkin Convent Campaign had said the “multi-storey” nursing home would “completely obscure” the mid-19th century convent and “undermine the important heritage of the village”.

However, the board determined the development complied with the South Dublin County Development Plan.