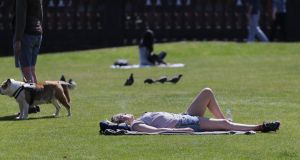 Very dry weather in the month of April resulted in “absolute” and “partial” drought conditions in various areas around the country, Met Éireann has said.

In its monthly climate statement, the national forecaster said that rainfall was below average in every part of the country while temperature and sunshine levels were above average countrywide.

It was cool and cloudy at times, especially at the start of the month, but there were also “numerous” warm, sunny days, especially during the mid-week periods.

It was warmest in the western half of the country during these periods, as the winds were mostly from the east off a cool Irish Sea.

The weather broke on April 29th as a complex area of low pressure brought active weather fronts across the country from the south and southwest, followed by showers on the 30th.

Rainfall totals across the country were below the long-term average (LTA), with the lowest levels of rain being recorded in the east and northwest of the country.

The highest daily rainfall was recorded at both Sherkin Island and Athenry on Wednesday 29th of April, when 25.6 mm of rain fell.

Temperatures were high across the board, with Newport, Co Mayo having the highest average temperature for the month at 11 degrees, 2 degrees higher than its LTA.

Dublin airport recorded the lowest average temperature for the month at 8.5 degrees, which was still 0.4 degrees higher than its normal average.

Malin Head in Co Donegal had the highest monthly total of sunshine with 204.4 hours, meaning a daily average of 6.81 hours per day.

On Monday April 20th, Malin Head recorded a total of 13.9 hours of sunshine, the highest daily total recorded over the month.

Cork Airport had the lowest total with 162.4 hours of sunshine over the month, meaning an average of 5.47 hours of sun per day.

The monthly climate report comes after Irish Water last week urged the public not to water gardens or to undertake “cosmetic” washing of cars and patios.

The utility said the water system was experiencing a “period of high demand” following an “unseasonably dry month”.

“The balance between the amount of water we can sustainably produce and the demand on water required in some regions, including the Greater Dublin Area, is an ongoing challenge,” Irish Water said.