John FitzGerald: Climate change and the end of an empire 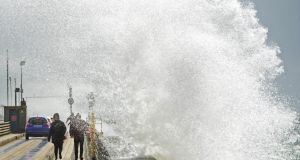 Since the collapse of the Roman Empire a millennium and a half ago, much time and research has gone into trying to understand its causes. Many explanations have been advanced, including poor governance and the disastrous monetary policy of the emperor Diocletian.

However, a recent IMF study suggests that it was a combination of climate change and a failure to develop sustainably, alongside social inequality and exclusion, that were the major culprits.

The IMF quotes recent research suggesting that, between 200 BC and AD 150, a period now known as the “Roman Climate Optimum”, the Roman world enjoyed a warm, wet and predictable climate, uniquely favourable to the empire’s key agricultural crops. When this favourable weather period came to an end, the Roman economy failed to adapt to climate change.

The adverse effects on agriculture extended across Europe and nearby Asia. The migration of the Huns from the east, “climate refugees on horseback”, had major political and military consequences. Successive invasions from the East posed a continuing massive challenge for the declining Roman empire.

Whether or not climate change played a decisive role, the very sudden collapse of Rome, whose population fell from a million to under 100,000 in a generation, is an example of how failure to adapt to rapidly changing circumstances can have catastrophic consequences.

Conventional economic history taught that wine was produced in medieval England but this had died out by the end of the Middle Ages, due to what was referred to as the advent of the “Little Ice Age”. A paper by two UCD economists, Morgan Kelly and Cormac Ó Gráda, suggests a rather different scenario.

Detailed temperature records for the Middle Ages are sketchy. However, the authors show that grain prices in England and the Netherlands closely tracked the known fluctuations in weather supporting the value of the available data. Bad weather in the growing season led to poor harvests and high prices.

Using these data, they show that, while the temperature fluctuated quite widely between 1200 and 1800, there was no long-term trend. They argue that the evidence on vineyards in the south of England exaggerated their significance, because the Latin word for a fishpond (vivarium) was often inaccurately transcribed as vineyard (vinarium). Fish ponds were actually much more common than vineyards.

While there were undoubtedly decades when the weather was very bad, leading to famine, these were offset by periods of better weather. Kelly and Ó Gráda’s data suggest that the underlying temperature in northern Europe did not change much up to the modern era.

Since recorded history began, the world has not had to adapt to such a rapid change in climate

This relative stability highlights the fact that the steady rise in temperatures from the late 19th century through the 20th century is a dramatic change in the planet’s weather.

The rise in temperature is already adversely affecting human welfare worldwide, with extreme weather events leading to major loss of life in Mozambique and the Philippines in recent times.

Crop failures in Central America have driven rural migration to impoverished and lawless cities in the region, and swelled migrant caravans heading for the US.

Here in Ireland, more extreme weather has brought more frequent and severe storms, increased flooding, droughts and wildfires, with all their negative consequences.

Even if efforts under the Paris climate accord are successfully implemented across the globe, by 2050, temperatures are still likely to be at least 1.5 degrees and probably 2 degrees above the pre-industrial era. Since recorded history began, the world has not had to adapt to such a rapid change in climate.

So we need to start investing in precautionary measures to deal with this inevitable rise in global temperature. We need to invest in protecting coastal cities and other vulnerable areas from flooding.

We need to “drought-proof” our water supply. All new building should steer clear of flood plains. While this essential investment will take place over decades, it will pre-empt significant resources over a lengthy period.