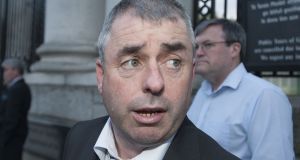 Independent TD Kevin “Boxer” Moran has said the State’s response to “catastrophic events” needs to be handled and co-ordinated by a single agency within a government department. File photograph: Dave Meehan/The Irish Times

The Government should consider setting up a dedicated agency for emergency situations such as major flooding, according to Minister of State for the Office of Public Works and Flood Relief, Kevin “Boxer” Moran.

Mr Moran said the State’s response to “catastrophic events” needs to be handled and co-ordinated by a single agency within a government department, adding “it is no longer the best approach” to leave all the responsibility “on the shoulders of the local authorities”.

Mr Moran’s comments follow severe flooding in Co Donegal earlier this week, in which 100 people had to be rescued. An estimated 500 homes suffered flood damage.

Having a dedicated agency for emergency situations would mean help “can be on the ground within hours”, he said.

“This is particularly important where houses have become uninhabitable and people need help urgently. The Government agency would oversee emergency services and protect people during natural disasters.

“Its primary aim would be to provide a rapid response in the case of emergencies.”

Mr Moran said the agency would meet on a regular basis with the aim of “assessing mission readiness for major emergencies” and would consist of relevant organisations such as gardaí, Defence Forces, the HSE and various government departments.

“The loss of one’s home is a traumatic event, even for a few days, and this is why I believe a dedicated agency would be able to react immediately where people have been left homeless,” he added.

“Similarly, the farming community should be given immediate assistance in rescuing stranded livestock and so on.”

Taoiseach Leo Varadkar has accepted that funding will have to be increased in future to prevent major flooding.

The Taoiseach, who visited the scene of flooding in Co Donegal on Friday, said there were plans to increase the €430 million budget which has been set aside for flood defences until 2021 under the new 10-year capital programme.

He added the budget was already “very substantial”, but nonetheless indicated it was always possible to have further increases.

“The key thing now is the clean-up and the clean-up is well under way and the Army has now been posted here and are helping with that,” he said.

“I’m satisfied with the response so far and that has to be sustained in the coming days, and additional funding will be made available to the [Donegal County] Council to carry out the necessary repairs and the Red Cross [scheme] is open to businesses and sport and voluntary bodies who don’t have insurance.”