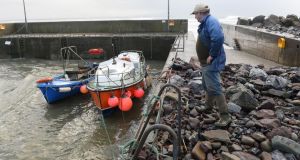 Fisherman Tom Dineen works to save a boat from the weather at Ballyheigue beach in Co Kerry, where waves pushed rocks hundreds of feet over a pier. Photograph: Domnick Walsh/Eye Focus

Hard decisions will have to be made about what parts of the coastline we want to retain and what parts we should “let go” in the face of “rising sea level and storm activity”, an environmental expert has said.

In the wake of serious coastal damage caused by the new year storms, Robert Devoy, professor of physical geography at University College Cork, said decisions would have to be made about which parts of the coast were too expensive to retain. We were used to the coast being pretty much in the same position for possibly the last 2,000 years, he said, with most areas only experiencing low-level erosion of between a half and one metre a year. “We tend to want to hold on to land, when it might be wiser to let it go because of the scale of the changes that are coming in,” he said.

It would be wise for authorities in coastal counties to look at their coasts “very clinically” with technical experts in conjunction with local populations to see how best to look at their future management, Prof Devoy said, but coastal engineering was expensive to build and maintain and so choices would have to be made.

“We need to assess which bits of the coast are most vulnerable to flooding and erosion and which bits of coast from a heritage viewpoint are important to retain and protect,” he said. “Often that might mean some unpalatable decisions will have to be made which local people may not like . . . it is a difficult decision of negotiation between national and local as to defining where you defend. That is what we are facing into.”

The clean-up continued around the country yesterday. Council workers in Clare, Galway, Limerick, Cork, Waterford, Donegal and Mayo, among others, continued trying to assess damage.

In Kerry, council spokesman Pádraig Corkery said it would not be possible to assess the damage until the rubble and huge boulders washed up on roads, piers and playgrounds had been removed. Four of the county’s blue flag tourist beaches – the White Strand near Caherciveen, Kells, Rossbeigh and Ballybunion – had been destroyed. “The beaches will recover. People are already walking them this morning,” Mr Corkery said.

“The infrastructure is the problem, the roads, the community playgrounds, the car parks.”

Kerry-based MEP Seán Kelly has said funding for the clean-up may be available from the EU Solidarity Fund and he would be seeking a debate on the matter in Strasbourg. Ireland South MEP Phil Prendergast said the Government should apply to the fund. After the 2009 floods, Ireland was granted €13 million, she said.

In Abu Dhabi yesterday, Taoiseach Enda Kenny said it would be necessary to get an accurate account of the scale of damage and the potential cost of rectifying that right across the west coast.

In Cork, Minister of State at the OPW Brian Hayes said the Government would give priority to funding for flood protection works damaged by the storm before committing money for general repairs to other infrastructure in lists submitted by local authorities.