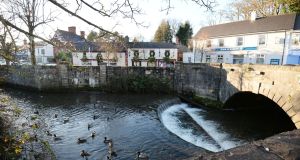 Lucan in west Dublin is set to be transformed into a tourism “destination town” under a series of South Dublin County Council projects.

Despite its picturesque location on river Liffey, its intact village core, significant number of heritage buildings, and proximity to the Phoenix Park, Lucan does not attract significant tourist numbers.

The council has appointed Waterford-based DHB Architects to undertake a €2 million “public realm” improvement project to the riverside and to the village green area, with initial designs expected to be completed by June.

“The overall objective in keeping with the county tourism strategy, is the promotion of Lucan as a tourism destination of note within the Dublin region,” the council said. “Concurrent with these planned enhancements, consultants will be appointed to advise on additional interventions on the future marketing and branding of the area.”

The council is also devising plans for a greenway to link the Grand and Royal canals via Lucan village. Cycle and pedestrian paths have been partially completed on both canals, and plans are already in place for their extension. The link route through Lucan will “further enhance its destination status” the council said. “The target areas include the Village Green, the Weirview promenade and the entrance to Lucan Demesne.”

Separately, the council is to spend €1.29 million on an “ intergenerational centre” at Tymon Park in Tallaght.

The centre will be a “multi-use facility that is adaptable to a variety of purposes, such as age-friendly and community groups,” the council said.

“There are several larger function rooms, a multi-functional community space, a coffee/tea shop with indoor and outdoor seating and an outdoor terrace sheltered by a canopy, which can provide space for outdoor cinema and other events.”

The preliminary design, currently being finalised, will include a landscape plan for the proposed facility to ensure the building is integrated into the parkland setting. The plan will also improve pedestrian and wheelchair access to the park, the council said.