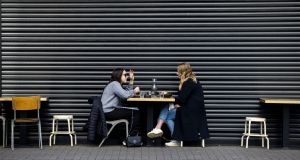 Before the pandemic, Ukiyo, a popular restaurant and nightclub on Exchequer Street, operated as an indoor venue. Like many other businesses, the pandemic forced it to pivot and start serving outdoors. It placed benches outside on Dame Court and people flocked to the eatery, rain, hail or shine.

“People were desperate to get out last year and they didn’t really mind,” says owner Duncan Maguire. “We had people with their own umbrellas. They just wanted to be out. They didn’t care. They were wrapped up. We warned them that it was inclement and they were like: ‘No we’re coming anyway.’”

Maguire says the transition to outdoor dining was “tough” but adds they were “very privileged and lucky” to be able to make it work.

The pandemic has forced a “cultural change” in terms of how Irish people consume alcohol and socialise, he says, with many of us growing accustomed to eating with alcohol. As a result, he predicts that outdoor dining may not just be a short-term measure but a permanent fixture in the city.

“It’s exactly what the city needs,” he says. “Retail and offices are really on the decline in the city centre. It’s hospitality and entertainment that is going to fill the void that’s left behind.”

There is no doubt that the pandemic has changed the way we socialise and interact with our cities. Indeed, the World Economic Forum has suggested that one of the side effects of the pandemic is that it “could usher in a new era of socialising outdoors”. There is evidence that this is starting to take place. In October, New York City Council passed a Bill making on-street dining permanent in the city following the success of its Open Streets: Restaurants programme.

Over the last year, Dubliners have arguably spent more time outdoors than ever before, with much informal socialising in streets, parks and beside canals. Outdoor dining, car-free streets and pop-up cycle lanes have become far more commonplace.

Not only have these measures helped curb the spread of coronavirus at some dangerous times, but they have also helped keep the city centre alive. As a result, many citizens have begun to reimagine what the city might look like post-pandemic.

Streets Are For People is an activist group that organises actions to reclaim public space for people. Its members say the pandemic has highlighted how we need more outdoor space for people and less space given over to private motor vehicles.

“That includes the widening of pavements to provide more space for people to walk around,” says a spokesperson for the group. “It includes the conversion of on-street parking to outdoor dining space or outdoor public seating space, and for certain parts of the city it should include the complete pedestrianisation of streets for the majority of the day.”

Additionally, the group says the pandemic has shed a light on how local authorities have failed when it comes to providing basic amenities like “water, toilets, shelter and seating”. Such provisions can be found in cities all over Europe, it says.

“We have seen a lot of people return to Ireland having lived abroad for a number of years and they’re now accustomed to living in cities that have a better provision of public space. It’s not just Mediterranean cities or warm cities. A lot of people have been living in places like Scandinavia, Germany, places that don’t have particularly warm climates but they still manage to have public seating, public plazas, outdoor dining year-round.

“It doesn’t stack up that our particular climate isn’t suited to outdoor space and outdoor living.”


Janet Horner, a Green Party councillor for Dublin’s north inner city, agrees. “The idea that the weather in Ireland isn’t good enough to enjoy or get value out of the public realm . . . the fallacy of that has been demonstrated over the last number of months,” she says. “We should be investing a lot more into those public amenities. For businesses, we have this idea that there are only about five sunny days in July for a pub to get use out of a good beer garden. And that’s just not true.

“When we were allowed, many of us were still meeting friends, sitting outside, having a coffee outside. You can still see it along the canal in the evening . . . It’ll be 3 degrees outside but you know what? A flask of hot coffee and people are happy for 45 minutes.

“We can and we should have a lot more outdoor amenities. A good coat and a good hat and you could make a lot better use of the outdoor space in Ireland.”

Cllr Horner says it is essential the public realm is not just for young people going to bars and cafes, but also for older people and children too. Asked whether there is the political will in Dublin City Council to enact these sorts of measures, she says that they could be doing “more and faster and better”.

“We have got the ideas and we’re moving in that direction. I’d like to see us move much more towards that provision of quality outdoor space, particularly given that the pandemic is going to be a major feature of how we work and operate as a city for at least the next year.”

For its part, Dublin City Council says that it is “fully committed to the concept of the outdoor city”. In a statement, it said that it has been “very proactive” throughout the pandemic when it came to implementing measures to assist businesses and manage the city safely for citizens.

It cited measures such as the waiving of the street furniture licence fee and the introduction of two public toilets at St Stephen’s Green and Wolfe Tone Square as examples of positive measures that have been taken.

“This proactive and flexible approach will continue in the next few months and years as we move forward,” it said. “The management of the public realm and balancing the various interests and demands on it can be difficult. The overarching public health guidelines and maintaining the use of the public realm for the greater good of all will be paramount in all decision making.”