Walkable, cycle-friendly Dublin: The planning model that could change the city

Dublin city centre: Practical trials have made projects that once seemed impossible a reality 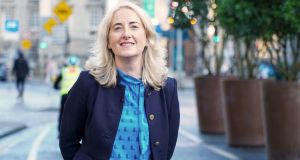 As a senior engineer with Dublin City Council, Patricia Reidy has been working since the onset of Covid-19 to create more space for pedestrians and cyclists in the city. Photograph: Enda O’Dowd

Dublin city is undergoing a remarkable transformation. After years, decades even, of stalled progress on cycling and pedestrian schemes, they are suddenly springing up like weeds across the city.

Never before has there been such momentum in the installation of segregated, protected cycle lanes, but also in better provision for pedestrians with the creation of wider footpaths pedestrianised zones and the rebalancing of traffic lights in their favour.

This has all been done under the aegis of, or some might say the guise of, temporary coronavirus mobility interventions, to better help people keep their distance, to allow businesses to use outdoor space, and to make walking and cycling more attractive commuting options with bus capacity reduced.

“Since the Covid crises really bombed off in March of this year, it became very obvious very quickly that there were going to be some mobility challenges for Dublin,” Patricia Reidy, senior engineer with Dublin City Council, says.

The coronavirus mobility team, which Reidy heads, began assessing the key radial routes into the city, the areas of high footfall within the city, and the busiest bus stops for potential improvements.

Some of the results of this work were very quickly apparent. It would be hard for anyone using the north quays not to notice the new segregated cycle lanes, initially delineated by bollards or “wands”, more recently being replaced by kerbing and planters. Similarly the protected cycle lanes at College Green, or on Constitution Hill on the northside where “advisory” cycle paths which were painted down one half of a traffic lane, inevitably putting cyclists into conflict with cars, have been replaced by kerb-protected lanes.

Other measures were less visually arresting but have made a dramatic difference to people’s experience of moving through the city, Reidy says, such as reducing the pedestrian waiting time at traffic lights, and most recently introducing sensors so people don’t have to touch the pedestrian buttons at crossings.

“The day of pushing the button will be gone, you will literally wave in front of the light and there is a sensor that will activate and tell that you’re looking for a green. We have about 240 of those installed and our plan is to put out at least 1,000 across the city.”

Equally, she says the extension of footpaths, mostly very narrow in the city centre, into the roadway, has altered the look and feel of the city. This measure in particular shows how the engineering response has evolved as the pandemic has progressed, she says.

“The footpath build-outs are something that was very innovative. We started at the beginning of the crisis with just the bollards, and then, with a more modular build-out a kind of rubbery platform. That had its pluses and minuses and was quite expensive. So we came to the conclusion it was actually easier to do temporary build-outs, built on sand.”

These gold-hued footpath extensions proved ideal for the outdoor dining areas, which began to pop up during summer 2020.

“We put in the temporary kerb and back filled with asphalt. We were able to deploy this throughout the Grafton Street Quarter area, on South Anne Street and Drury Street, as well as College Green,” she says. “So as the virus developed, we also developed our innovative solutions.”

Reidy acknowledges the pace at which these changes have been made is astonishing.

“One minute you fall asleep and the next minute you wake up and you have a brand new footpath. It’s almost like footpath angles came along in the middle of the night.”

Which begs the question: why wasn’t this done years ago? Campaigners, particularly cycle campaigners, have for decades sought protected cycle lanes. The Liffey scheme was first proposed 13 years ago.

According to Minister for Transport Eamon Ryan, he first asked for a contra-flow cycle lane – a path running against the flow of traffic – on Nassau Street 30 years ago, and now, suddenly here it is, along with others on Werburgh Street (down the side of Leo Burdock’s chipper) and another in the process of installation on Parnell Square so cyclists can head directly north from O’Connell Street.

One of the reasons is the ostensible “temporary” nature of these projects. “The problem with large infrastructural projects to date is that you have to dig down to put them in, it involves messing around with utilities, undertaking large civil works,” Reidy says.

“The beauty of the Covid mobility programme is that they were temporary, interim measures that were capable of being rolled out through rapid deployment and can be taken up in time if needs be. So there was no ‘big dig’ or major civil works involved.”

The “emergency” nature of the works, done as they were in response to the pandemic, also facilitated speedy development, she says.

Endless rounds of public consultation and refusal of councillors to approve a scheme were what stymied the Liffey cycle path for so long. In the case of the mobility measures, the council simply selected locations and undertook the work.

However, often these schemes were at the request of the public and businesses. The council has received more than 5,000 requests for mobility measures, more than 1,000 of which were for protected cycle lanes.

Reidy also stresses there was consultation in the implementation of the measures. “We involved the disability groups and invited all of them to the various footpath build-outs, because obviously universal mobility is very important to us. We took on board any of the feedback they had and ultimately as each build-out was unfolding it got better and better by taking on board the feedback from the disability groups.”

She also believes running practical trials, rather than desktop consultations, has helped spread an acceptance of the measures. “We used trials in the summer, it’s a fantastic way of seeing does it work, does it not. If something doesn’t work, we’ll take it out.”

This was particularly important with the contra-flow lanes, previously very rarely used in the city. “I always believe with these measures that there will be a contagion effect once you start to roll out one or two. Now that we have one on Nassau Street, and we’ve an excellent one on Werburg Street, and coming up on Parnell Square, slowly but surely they will come.

“You have to start somewhere and you have to keep moving, and we intend to keep building on this momentum. This is a wonderful way of trialling some contra-flow in the city with a view to rolling it out further down the line.”

Lastly, she says there was Government buy-in and funding.

“Because the emergency works had to be carried out to facilitate social distancing, the Government gave us this diktat and provided the funding through the National Transport Authority to deliver Covid mobility emergency interventions.”

Crucially, that funding is going to continue into 2021. The council secured €3.2 million in the Government’s July stimulus package for “active travel”, ie walking and cycling measures, this year but €7.6 million for next year.

“We absolutely know there is an enormous amount of funding coming in 2021 in walking and cycling enhancements,” Reidy says.

A sizable chunk of that funding will be spent on making it safer for children to cycle to school.

“School zones at the moment are a particular priority for us. We realised, and we all know this, that if you get kids actively travelling from a very young age they are more likely to travel as adults.”

The council is installing pencil-like bollards close to school gates to prevent pavement parking as well as coloured circles on the road to encourage speed reductions.

So far 92 schools have signed up to the scheme, with more expected to come on board next year.

The continuing and increasing level of funding makes clear what everyone already knew: these temporary or emergency measures will be harder to shift than Japanese knotweed.

“We are going to use this opportunity to build on the momentum – the funding is there, the mindset is there, we certainly won’t be found wanting.”