‘City could live or die’ by project when impact on tourism, business and footfall factored in 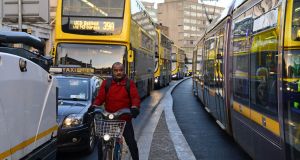 Traffic coming onto College Green in Dublin city centre: There was an assumption the Luas would dominate over buses and “everyone else would just have to put up with it”. File photograph: Cyril Byrne/The Irish Times

Alternatives to the current design and location of the proposed College Green civic plaza in Dublin city centre were not properly evaluated, it was claimed at a planning hearing.

An environmental impact assessment report on the project was overreliant on the findings of a “Clonskeagh to City Centre Cycle Project” report originally dating from 2014, which favoured cyclists over other road users, according to Marcus Hanahoe of ME Hanahoe Solicitors. He was representing his business and property owners, other businesses and residents in the Parliament Street area at the hearing.

There was an assumption from the outset the Luas would dominate over buses and “everyone else would just have to put up with it”, said Mr Hanahoe.

Up to 1,600 buses per day – including 145 buses an hour at peak times – are expected to be diverted through that part of the city if the plaza is approved by An Bord Pleanála.

When impacts on tourism, business and footfall were factored in, “the city could live or die as a consequence of this project”, Mr Hanahoe said.

The findings of the environmental impact assessment report on alternative options was largely based on a “cycling route document” produced by the engineering company Clifton Scannell Emerson Associates, he said.

He expected to see alternatives evaluated, including equivalent reports on buses, taxis, pedestrians and private cars, given the project is going to “completely redefine transport in Dublin”.

He claimed the document did not give consideration of taxis, a position which was open to the interpretation “that they were to be done away with”. Likewise, the objective did not allow for an increase in the number of buses, given private cars were going to be curtailed.

Mr Hanahoe said a report in November 2015 presented to South East Area councillors included provision for east-west traffic in the form of a bus corridor through College Green. But in his view, Dublin City Council (DCC) sought another report “to come up with a different answer”.

DCC head of technical services Brendan O’Brien said councillors had numerous reservations relating to monuments, bus lanes and cycling safety, so this option was not pursued.

Further options were sought and considered. In looking at alternatives, removal of buses was evaluated. This was a form of public transport, so taxis fell into the same category. “No mode of transport was prioritised over another in the evaluation,” he said, and the concerns of Dublin Bus were taken on board.

Removal of east-west city traffic was considered best in a number of the 12 options, he added.

Independent Councillor Mannix Flynn said DCC should not be given special status and needed to be challenged on the project in the same way a private development in Ballsbridge would be interrogated. If the plaza proposal was coming before the council it “would be laughed out the door”, he said, because of potential environmental impacts.

Representing DCC, Jarlath Fitzsimons said evidence given on environment effects associated with the project would be disputed by the local authority.

On alternatives, Cllr Flynn said the chief executive of the council did not want any east-west traffic crossing the city. In that scenario, Cllr Flynn believed there were no alternatives other than “pseudo-alternatives”.

He added: “It was a quick and easy way to address the traffic issue with Luas crossing the city. It doesn’t stack up any other way...there was ‘this way or the highway’.”

A civic space for the city was always mooted by the council but with a view to temporarily setting it up when required. However, it “went from that to a 24-7 plaza” at College Green, though there were other locations such as Smithfield and outside the Dublin Civic Offices which merited consideration.

Activist Robert Sinnott, who has a visual impairment, said the design failed to meet disability obligations, and questioned why cyclists were not being asked to dismount when travelling through the plaza.

Mr O’Brien said that “discontinuity” would diminish quality of service for cyclists in the city. The proposed design was the best option for both pedestrians and cyclists in a reduced speed scenario.

Architect Paul Keogh of the design team said he was surprised at the extent to which very little consideration of vulnerable pedestrians, such as the provision of “tactile paving”, was given in major European cities with similar features. In contrast, the Dublin project was following best practice, he added.

The hearing resumes on Tuesday, while a module on traffic impacts is due to begin.