Climate change effects to be far worse than previously thought 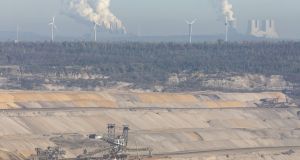 The immediate consequences of climate change are worse than previously thought, according to the world’s leading climatologists.

Their warning of heightened threat to the planet before 2040 is one of the main conclusions in a landmark report on the likelihood of containing global warming to a 1.5-degree increase on pre-industrial levels.

Avoiding the likely immediate damage requires transforming the world economy at a speed and scale that has “no documented historic precedent”, they warn in their report, issued by the UN on Monday.

Limiting global warming to 1.5 degrees by mid-century would require “rapid, far-reaching and unprecedented changes in all aspects of society”, it adds.

There is only a dozen years for global warming to be kept to a maximum of 1.5 degrees, it finds – beyond which even half a degree will significantly worsen the risks of drought, floods, extreme heat and poverty for hundreds of millions of people.

With clear benefits to people and natural ecosystems, limiting global warming to 1.5 degrees – rather than 2 degrees – could go hand in hand with ensuring a more sustainable and equitable world, the IPCC said after its report was issued.

The “half-degree difference” could also prevent corals from being completely eradicated and ease pressure on the Arctic, the report finds. It was launched after approval at a meeting of 91 lead authors and government representatives of 195 countries, including Ireland, in Incheon, South Korea. It was commissioned after the Paris Agreement was agreed in 2015.

We know that #climatebreakdown presents an existential risk to human populations and much of the other life on Earth. Yet the gas guzzler still accelerates towards the cliff edge. Why? Thread ...

The findings have increased pressure on politicians throughout the world to ramp up ambition, as the scientific evidence presented in the report is unequivocal – and the scale of immediate threats is laid out in a variety of likely scenarios, depending on climate actions taken.

“Scientists might want to write in capital letters, ‘ACT NOW IDIOTS’, but they need to say that with facts and numbers,” said Kaisa Kosonen of Greenpeace, who was an observer at the negotiations. “And they have.”

One of the contributing authors to the study, Prof Peter Thorne of Maynooth University, underlined its stark findings, which had not been weakened in the final version ratified by governments. But he added:“Scientists can only do so much in assessing what the scenarios mean. They have handed those over to the governments of the world to respond.”

He added: “We need to transform the way we live, travel and work, but it does not mean going back to proverbial caves. We need to adopt technological solutions.”

With the ball being put back in the politicians’ court, he questioned the Irish Government’s “real appetite for action”, given reports that attempts were being made to minimise an increase in carbon tax in the budget. “The true cost of carbon, if accounting for the warming impact, is likely somewhere in the range of €150-€200 per ton. It’s currently taxed at 10 per cent of that. The result is a huge IOU to future generations.”

The IPCC report, which will inform global action on climate over the next decade, finds that limiting global warming to 1.5 degrees would require “rapid and far-reaching” transitions in land use, energy, industry, buildings, transport, and cities. Global net human-caused emissions of CO2 would need to fall by about 45 per cent from 2010 levels by 2030, reaching “net zero” around 2050 – Ireland has committed to an 80 per cent reduction in emissions by 2050.

The report was approved by the IPCC on Saturday. It will be the key scientific input into the Katowice Climate Change Conference, known as COP24, in Poland in December, when governments review the Paris Agreement to tackle climate change and reaffirm their commitments.

“It’s a line in the sand and what it says to our species is that this is the moment and we must act now,” said Dr Debra Roberts, a co-chair of the IPCC working group on climate impacts. “This is the largest clarion bell from the science community and I hope it mobilises people and dents the mood of complacency. The decisions we make today are critical in ensuring a safe and sustainable world for everyone, both now and in the future,” she added.

The report gives policy makers and practitioners the information they need to make decisions that tackle climate change while considering local context and people’s needs, she believed. As a consequence, “the next few years are probably the most important in our history”, Dr Roberts said.

“Every extra bit of warming matters, especially since warming of 1.5 degrees or higher increases the risk associated with long-lasting or irreversible changes, such as the loss of some ecosystems,” said Prof Hans-Otto Portner, co-chair of IPCC Working Group, which evaluated adaptation issues and vulnerability.

Limiting global warming to 1.5 degrees rather than 2 would reduce challenging impacts on ecosystems, human health and wellbeing, making it easier to achieve the UN Sustainable Development Goals, the report notes.

The Paris Agreement adopted by 195 nations included the aim of strengthening the global response to the threat of climate change by “holding the increase in the global average temperature to well below 2 degrees above pre-industrial levels and pursuing efforts to limit the temperature increase to 1.5 degrees”.