Children’s climate uprising a minefield for parents, schools and teachers 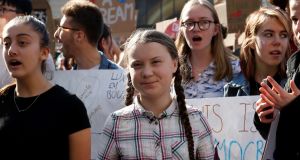 Greta Thunberg, the 16-year-old Swedish climate activist takes part in a march for the environment and the climate organised by students in Paris. It is clear that the children’s climate rising sparked by Greta is not going away. Photograph: Getty Images

Nothing quite captures the current mood than thousands of children, some just old enough to tie their shoelaces, marching through the streets demanding urgent climate action.

Their colourful homemade signs bear poignant slogans such as “save my future” “there is no Planet B”. The noisy, energetic and irreverent protests are carnival-like. The youthful passion on display is almost consoling for older generations: “Isn’t it just great that the young people are out. They will save the planet.”

Yet there is nothing sweet or consoling about what is happening here. There is simmering rage. United States senator Dianne Feinstein’s recent encounter with a group of these children epitomises the political perils faced by those on the sharp end of this uprising. An edited video of her dismissive, condescending remarks to the group in her office went viral on twitter.

Greta after all is technically skipping school without consent every Friday

Belgian minister for the environment Joke Schauvliege, moreover, was forced to resign after wrongfully claiming she had evidence the protests were part of a conspiracy.

Australian minister for education Rob Stokes felt the wrath of Greta Thunberg, the 16-year-old Swedish activist leader, when he threatened punishment for those who join the Global Climate Strike on March 15th.

For sure, Stokes succeeded in doubling the numbers planning to defy him.

It is clear to those who understand the science that what the children are saying is correct and their extreme action is warranted. The climate science they are basing their action on is clear: humanity has a mere decade left to shift our entire societies to near zero emissions or face calamity.

At present global emissions have not even flatlined. Children’s awareness of these facts should not come as a surprise. Climate science is taught across the school curriculum. Schoolchildren in Ireland have participated in the Green Schools programme and thousands have taken part in campaigns highlighting climate justice.

Almost one in five of the entries to the BT Young Scientist Competition this year was on climate. A generational knowledge gaps exists on climate change, as the vast majority of adults aged over 30 simply did not receive any climate-change education at school or even university.

The current wave of climate strikes presents a headache for those with a duty of care towards children – many of whom might consider following Greta’s example.

Should they be encouraged? Discouraged? Ignored? Facilitated? Given that renowned scientists support the action, how can caring adults be against them?

The exponential growth of strikes are posing a real challenge to the norms governing what children can and cannot do, who gives consent, who can engage with them and on what terms.

Greta after all is technically skipping school without consent every Friday, yet she has been greeted with a kiss from the head of the European Commission and given a global platform to speak at the UN and Davos. She has had a meteoric rise to global superhero status.

The problematic nature of the strikes comes into sharp relief on social media, where they are mainly being organised. As with any online activity, engagement presents risks for children in terms of safety, misinformation and possible manipulation.

It is also a minefield for parents, schools, and teachers. Since I started a Friday climate strike outside Leinster House on behalf of my own children, I have become aware of the growing risks of an unsupported children-led global action.

I have been repeatedly contacted via social media by children asking how they should start their own strike. One Saturday evening a Swedish woman even “joined” me to a private Facebook chat which turned out to have a mix of unconnected Irish adults and children whom she had contacted due to their interest in the Friday strikes.

She wanted to support children to strike and connect them with adults and other children they did not know and she had never met. It was naive in the extreme, and fraught with risks, particularly around online safety and consent. She may have had good intentions, but this episode highlighted the growing challenge of a children-led global strike movement.

It is clear that the children’s climate rising sparked by Greta is not going away. The climate strikes have unleashed the power to shift the debate towards a hopeful future.

The key question now is how concerned adults respond. Closing this rising down is not an option, nor is it warranted. Some schools have agreed to facilitate their students’ participation in Friday climate protests, as happens in Dublin each week outside Leinster House.

Teachers have volunteered to give up their lunch break and accompany groups of students to protest on a rota. Yet sustaining this relies heavily on voluntary action on already stretched resources and places one more burden on schools.

Perhaps the bigger answer lies in allowing the children themselves to become agents in bridging the intergenerational knowledge gap. To do this, adults need to listen, learn and make the children’s growing call for urgent climate action their own.

After all, climate change is a problem made by the parents, not children. The older generation needs to demonstrate they have skin in the game and when possible, march with their children.

Dr Lorna Gold is a lecturer at Maynooth University and author of Climate Generation - Awakening to our Children’s Future (Veritas, 2018)

3 Laura Whitmore: ‘I’ve had enough of being trivialised and gossiped about’

4 Fintan O’Toole: The Covid-19 pandemic should be the last hurrah for Irish stoicism