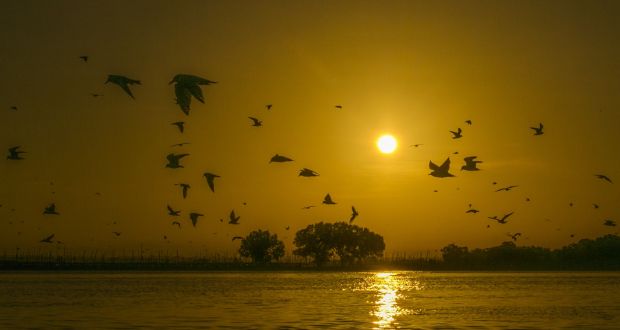 The author believes we should be alarmed about future of the planet but only in the context of humanity’s survival. File photograph: Jes Aznar/Getty Images

Book Title:
The Uninhabitable Earth: A Story of the Future

In July 2017, New York magazine ran a hefty 7,000-word cover story titled “The Uninhabitable Earth”. Within a week, it had become the most widely read article ever published by the magazine. Its dystopian vision of a near-future razed by runaway climate change sparked a huge public reaction.

Far from a mere sensationalist screed, the essay, by David Wallace-Wells, had been meticulously researched over many months, shaped around an extensive review of the scientific literature as well as in-depth interviews with mainstream climatologists. What made this article so exceptional was its visceral bluntness. Humanity, he concluded, is stumbling blindly towards the precipice of an unfathomably grave global ecological catastrophe. Oddly, much of the initial criticism of his article came from the scientific community, where professional reticence is the norm, and where the label of “alarmism” is studiously avoided.

Wallace-Wells demurred: “when it comes to the challenge of climate change, public complacency is a far, far bigger problem than widespread fatalism – that many, many more people are not scared enough than are already ‘too scared’. In fact, I don’t even understand what ‘too scared’ would mean . . . I don’t think it’s a slur to call an article, or its writer, alarmist. I’ll accept that characterisation. We should be alarmed.”

Some 18 months later, his essay has been expanded into a full-length book of the same title, complete with 65 pages of end notes. “It is worse, much worse, than you think” is how he begins. He notes that today there is more carbon dioxide (a key greenhouse gas) in the atmosphere than at any time in the last several million years.

Scientists have been warning governments about this for decades, but real global political action can be traced back to the Earth Summit in Rio de Janeiro in 1992. While humanity has been emitting copious amounts of greenhouse gases for the last two centuries, it is sobering to consider that more than half of all the carbon dioxide humans have ejected into the atmosphere has happened in just the last three decades.

“This means we have now done as much damage to the environment knowingly as we ever managed in ignorance,” Wallace-Wells notes drily. “The story of the industrial world’s kamikaze mission is the story of a single lifetime – the planet brought from apparent stability to the brink of catastrophe in the years between a baptism or bar mitzvah and a funeral”.

It may come as a surprise to learn that Wallace-Wells is not and never has been an environmentalist. “I don’t even think of myself as a nature person, I’ve lived my whole life in cities, enjoying gadgets built by industrial supply chains.” He admits with some candour that he has always accepted the implicit trade-off between nature and economic growth, “and figured, in most cases, I’d go for growth”.

So, what has changed? “I am like every other American who has spent their life fatally complacent, and wilfully deluded, about climate change,” which he now grasps threatens the very survival, let alone welfare, of our species.

As a fellow non-environmentalist who stumbled journalistically into climate change as a “story” some 15 or so years ago, I have some sympathy for Wallace-Wells, who is clearly still personally reeling from the mind-numbing, sanity-bending implications of what he has uncovered.

What I found disappointing is that his grim journey of discovery does not yet appear to have widened his circle of empathy beyond the fate of humanity. Yet already, the unmistakable scent of death is all around us. Scientists estimate that between 150-200 species of plant, insect, bird and mammal become extinct every 24 hours as ecosystems unravel.

Yet the destruction of the natural world and collapse in global biodiversity only appears to concern Wallace-Wells insofar as it impacts on one species. One of his all-too-rare forays into looking at climate impacts on non-humans involves the shocking mass death of hundreds of thousands of an Asian dwarf antelope, the saiga, in a single incident in May 2015. Elevated temperatures had caused a usually benign bacteria to suddenly turn deadly. Once again, the author only filters this as a potentially cautionary tale for humans.

“I may be alone on the environmental left in feeling that the world could lose much of what we think of as ‘nature’ as far as I cared, so long as we could go on living as we have in the world left behind.” The problem, he laments, “is we can’t”.

It dawned on me that the meaning of the term Uninhabitable Earth in his title only relates to its fitness to support humans – an astonishingly reductive view of a planet teeming with countless millions of species, a vanishingly rare jewel of diversity, beauty and complexity in the cosmos.

Wallace-Wells is correct in noting that while much of the disruption that awaits us in the coming decades is already baked in, thanks to climate system inertia, he wonders aloud: “if humans are responsible for the problem, they must be capable of undoing it.”

This, unfortunately, is rarely how cascading failures in complex systems play out. The climate genie is already out of the bottle, yet just how much havoc lies ahead, and within what time scale, is very much up for grabs.

He quotes the novelist Richard Powers urging us to: “unblind ourselves to human exceptionalism”. Yet within a few pages, Wallace-Wells is back to hubristic musings about transcendent human exceptionalism: “We have an idiomatic name for those who hold the fate of the world in their hands, as we do: gods”.

Wallace-Wells is a skilled essayist, as evidenced in his 2017 New York magazine article. Rather than advancing and refining his original arguments, the book feels rushed, and might have benefitted from a good deal more editing to clarify and develop his arguments, while also freeing the narrative from an unhelpful tangle of statistics and extraneous details.

While it has its strengths, perhaps its greatest shortcoming is that his journey of discovery should have left the author so one-dimensional and oddly detached in his narrow gaze at the fate of one species among millions.