Review: This ‘witness statement’ for Netflix is filled with truths worth hammering home 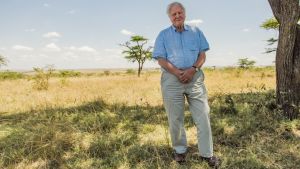 David Attenborough: ‘We have come this far because we are the smartest creatures that have ever lived. But to continue we require more than intelligence. We require wisdom’

Film Title: David Attenborough: A Life on our Planet

David Attenborough’s moving essay film for Netflix – or “witness statement” as he puts it – begins with an accidental (I guess) reminder of the first scenes from The World at War.

That 1973 series, telling the story of the second World War, famously opened by showing us the annihilated French town of Oradour-sur-Glane. Sir David – now 93, but still spry – offers a similar “on that day” narrative as he wanders about the ravaged buildings of Chernobyl. One might reasonably expect a sombre Old Testament prophecy of ecological apocalypse. There is a fair bit of that, but Attenborough is also here to offer hope.

The great man reminds us that his career as a naturalist accompanied the planet through the worst ravages of climate change. He talks about the comfortable postwar years (we will forgive the directors’ cliched shots of 1950s housewives opening huge fridges) and how television opened up the world to viewers.

There is a plausible sense of “nobody knew” about the looming crisis. He talks about our first glimpse of the fragile planet from space. He moves on to the destruction of the rainforest. By the 1990s, the long-predicted temperature rises were altering the global eco-system.

David Attenborough: A Life on Our Planet - official trailer

All this is illustrated with archive footage from his classic series – Life on Earth stands beside The World at War as one of British TV’s great achievements – and predictably spectacular new footage.

Little of this will come as news to anyone inclined towards a David Attenborough documentary, but these are truths worth hammering home. There has been some unfair criticism of Attenborough’s focus on overpopulation – dubbed “racist” in certain circles – but his focus here on the virtues of education, healthcare and renewable energy seems above reproach.

In the closing sections he allows himself to be optimistic that the species can pull through. “We have come this far because we are the smartest creatures that have ever lived,” he says. “But to continue we require more than intelligence. We require wisdom.”

At this stage we are back in Chernobyl. The camera moves to reveal that the site is now thriving with species that struggle in the presence of humans. “The wild has reclaimed the space,” Attenborough explains.

The shots of wolves, deer and foxes wandering about the blasted locale would give Andrei Tarkovsky pause for thought.

Rome vs Greece: a little-known clash of empires
7

‘Black hair is so much more than hair’: Emma Dabiri’s passionate exploration of identity
Real news has value SUBSCRIBE