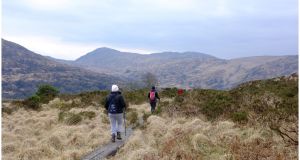 A wildlife group has asked a United Nations body to suspend the designation of Killarney National Park as a biosphere reserve.

Irish Wildlife Trust made the request to Unesco - the United Nations Educational, Scientific and Cultural Organisation - and expressed concern about the management of the 10,129 hectare park’s woodlands and deer, and due to threats posed by invasive species.

Biosphere reserves are a network of more than 600 places of unique ecological and cultural status across more than 100 countries.

The trust said Killarney had failed to maintain standards of conservation and protection and it should be forced to reapply for the designation which is used to promote the park.

The park, given the designation in 1982, is managed by the National Parks and Wildlife Service (NPWS). Surrounding moorland - the subject of wildfires in recent years - also comes within the designation*.

In its formal complaint to Unesco, the trust says Killarney has not lived up to its status. It cites long running concerns about issues such as the culling of “the unique red deer population, the spread of alien invasive species and overgrazing by herbivores, including domestic animals”.

The trust also notes that periodic reviews, which should be carried out every 10 years, have not been undertaken.

“People rightly look highly on Unesco for the work it does in protecting global heritage and assume that places which carry its name are maintained to the highest standards. In the case of Killarney National Park this clearly is not the case,” it wrote.

“The (trust) would therefore like to lodge a complaint with UNESCO for not upholding the standards for ‘biosphere’ status. ”

The NPWS said it was currently preparing a periodic review of the park, in conjunction with Kerry County Council.

* Correction, January 4th, 2017: An earlier version of this story stated incorrectly that Bull Island in Dublin Bay was the State’s only other biosphere reserve. In 2015, Dublin Bay Biosphere was designated by Unesco. This new designation greatly expanded the former North Bull Island Biosphere to encompass all of Dublin Bay.

3 Abbeyfeale: ‘People will tell you the town is f***ed’