Retailer expects to divert millions of coffee cups from landfill 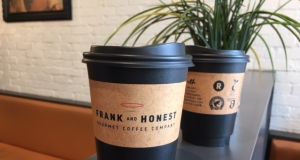 The compostable coffee cup and lid that will be introduced in all SuperValu and Centra stores from next September - it will be suitable for disposal in brown waste bins.

Millions of coffee cups a year could be diverted from Irish landfill following a decision by a major retailer to introduce compostable coffee cups in its outlets from September.

SuperValu and Centra are to replace all non-recyclable, single-use cups with new compostable cups and lids, which will be manufactured in Ennis, Co Clare and Cork. The stores sell coffee under the ‘Frank and Honest’ brand.

The retailers say the cups and lids will be suitable for disposal in domestic brown waste bins and for organic recycling in commercial composting facilities.

Minister for Climate Action and Environment Denis Naughten said the decision on compostable cups “is a significant move that will lead to millions of single-use non-recyclable cups being diverted from landfill annually”.

He said he was “really pleased to see two Irish businesses – CupPrint in Ennis and Down2Earth Materials in Cork – benefit as a result”.

CupPrint chief executive Terry Fox said plastic cups were 94 per cent paper but in most instances lined with polyethylene coating. Their product replaces the plastic with a plant-based coating known as PLA, he said.