An ethical look at climate change

World View: Inequality is built into consumption globally as well as nationally 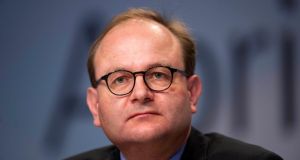 Defining climate change as a “global commons problem” Ottmar Edenhofer said tackling it requires an urgent move away from “business as usual”, as he launched the Intergovernmental Panel on Climate Change report on how to mitigate its effects this month.

It is a collective action question on a global scale, he said. Effective mitigation will not be achieved if individual agents advance their own interests independently. Institutional and technical change must be combined with dedicated policies to ensure average world temperatures by 2050 rise less than the two degrees these scientists say is within safety limits. If instead the increase reaches a range of 3.7 to 4.8 degrees, this would irreversibly change life on Earth.

His remarks highlight the choices that must be made between different interests and the mechanisms involved. As one of the associated authors of this report, John Broome, has put it, “where interests conflict ‘should’ questions are always ethical”. The report contains a substantial chapter on social, economic and ethical concepts and methods.

It surveys recent work in the field, including ethical questions dealing with justice and value, economic ones resulting from particular decisions and policies and how selfish interests contradict social ones in a manifestation of the “tragedy of the commons” first identified by Garrett Hardin in 1968 dealing with population increases and limited resources. Among the difficult issues discussed are the discount rate between present and future lives and whether to prioritise poorer over richer victims of climate change, on which Broome has done excellent work (see Scientific American , May 2008).

Climate ethics is a relatively small but rapidly growing branch of philosophy. It has a crucial role to play in clarifying the conceptual and political choices we face in this area. They include dealing with the value we place on the immense scientific research effort involved in these IPCC reports. Their findings are carefully ranked for levels of confidence, while the peer reviewing and referencing is extraordinarily comprehensive.


Philosophically rich
The work is also uniquely cross-disciplinary, a wonderful example of how natural, social scientific and historical approaches can be combined. Philosophers dealing with climate ethics believe this demanding requirement diminishes its academic appeal in a world where specialism carries such a cachet for career advancement in narrow fields.

Journalists are really challenged to report the findings accurately because of this, even though they are carefully summarised. As reflected in the letters page of this newspaper, there is also the issue of whether and how to report sceptical or contrarian views not backed up by evidence or flying in the face of it. These are reports dealing with the effects of human activity on the world’s climate, taking account of the fact that half the accumulation of greenhouse gas emissions since 1750 has occurred in the last 40 years, a finding reported with high confidence. Much longer-term natural cycles of global heating and cooling are a quite distinct question.


Academic embrace
Given the importance of the subject, it is puzzling that President Michael D Higgins’s ethics initiative under way in universities and colleges throughout the State hardly mentions climate ethics. Subjects to be covered range from disasters, economics, cultural diversity and professional ethics but do not address climate directly. Of course, the subject comes up in each of these spheres and should be encouraged to do so.

Publication of the Government’s climate Bill this week makes it even more topical. Critics who say the Bill avoids agreed deadlines or reduces existing commitments are raising ethical points. So are those who say that unbridled capitalist growth unrestrained by global, national or regional institutions and rules will destroy the global commons.

To illustrate what is at stake it is worth recalling some elementary figures about the distribution of wealth and consumption. The World Bank calculates that the wealthiest 10 per cent of the world’s peoples consume 60 per cent, whereas the bottom 40 spend only 5 per cent and the bottom 70 a mere 15.3. The world’s population nearly tripled from 2.5 billion to seven billion between 1950 and 2008, whereas global gross domestic product rose eight times. So inequality is built into consumption globally as well as nationally.

This rich minority uses the equivalent of one and a half planets a year on consumption and waste. Extrapolating trends to 2030 shows two Earths would be necessary. If the whole world consumed like Americans, five more planets would be required. Such business as usual is utterly unsustainable. Convincing people to act on it is a political and also an ethical imperative.