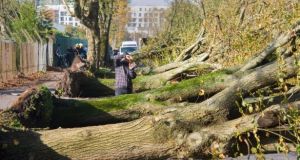 Trees which stood for over 100 years at the Marina in Cork city following Storm Ophelia. Photograph: Daragh Mc Sweeney/Provision

Storm Ophelia brought the highest gusts ever recorded to parts of Co Cork, according to Met Éireann.

A wind speed of 84 knots (155.6 km/h) was registered at Roches Point during Storm Ophelia which hit the country on October 16th.

The weather station, which has been operating on the site since 1940, also recorded the highest 10 minute mean wind speed of 62 knots (114.8 km/h) on the same day.

Storm Ophelia was one of the strongest storms ever to make landfall in Ireland. It killed three people and left almost 300,000 homes without electicity.

Storm Ophelia and Storm Brian, which followed on the 21st, was the highlight of what was otherwise an unremarkable month climatically.

It was in general a very mild month with temperatures ranging from 0.6 degree centigrade above the long term average at Mace Head in Co Galway to 1.5 degrees at Dublin’s Phoenix Park.

The highest maximum was reported on the 13th at Dublin (Phoenix Park) with a temperature of 19.9 degrees centigrade. There was no air frost reported in October, but two thirds of stations reported ground frost.

There was a distinct east/west split in rainfall patterns. Eastern parts of the country had a dry October with Johnstown Castle in Co Wexford (53 per cent) and Dublin Airport recording just 60 per cent of the average rainfall for the month.

By contrast Newport in Co Mayo recorded 190.1mms of rain, 108 per cent of the long term average for October.

The number of rain days ranged from 18 days at Johnstown Castle, Co Wexford to 29 days at Knock Airport, Co Mayo.