A cure in the Comeraghs 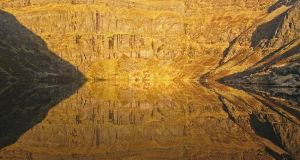 “Why should I want to go to Africa, or anywhere else?” Paddy Dwan asks, surveying the broad expanse of the Comeragh mountains from a roadside gap between Carrick-on-Suir and Lemybrien.

He quotes Thomas Merton, monk, mystic and radical social activist, who said that “it is essential to experience all the things and moods of one good place”. And then this veteran photographer provocatively brings the focus down yet again, from the mountain range to the hedgerow at our feet.

“Isn’t there plenty right here to keep you going for a long time?” he says. We find masses of soft pink redshank and blazing yellow sow thistle at first sight. And down among their stems, as we look more closely, there are so many other tiny flowers: speedwell, forget-me-not, willow herb, scarlet pimpernel. And all the nameless (to me at any rate) insects feeding among them. A micro cosmos.

Then he shifts our gaze up again, to Uisce Solais, one of the Comeragh’s many distinctive watercourses. It’s living up to its name as ‘water of light’, glittering like silver foil as it tumbles down a series of steep gullies.

Mark Roper, Dwan’s collaborator on a series of idiosyncratic and illuminating books on the natural and social history of Waterford landscapes, slipped on a sheep trail up in one of these gullies. He was researching their latest book, Comeragh: Mountain, Coum, River, Rumour.

“I didn’t hit the ground because it wasn’t there,” he recalls laconically in the book. When his fall finally came to a very painful halt, his neck was broken. A mobile phone signal, his knowledge of his exact location, and a first-class mountain rescue unit saved his life.

Looking up towards the scene of the accident today, he remembers mostly the exhilaration of knowing he was still alive as he lay there, waiting for a helicopter. In a beautiful essay in Archipelago magazine, he has described his condition then (and now) as, in a very particular sense, “blessed”. He does not beat himself up for breaking the mountaineer’s rule not to hike alone.

He insists that a large part of the pleasure, even of the meaning, of spending time in the great amphitheatres formed by the Comeragh’s characteristic coums, or in any natural landscape, can only be experienced in solitude. Risk comes with the territory.

Dwan agrees. Their working partnership requires many hikes taken together, where they spark impressions and ideas off each other. Dwan says many of his photographs are taken “in the moment” on such trips, without any forethought.

But he says they also undertake as many solo explorations, and that these are at least equally enjoyable and productive. They later share their findings via Dwan’s luminous photography, where closely observed nature studies shade into art, and Roper’s short, evocative prose passages, which shift seamlessly from hard facts to lyricism, and his spare, singing poetry.

Their books are enriched by brief, telling interviews with local people. “These are their mountains, after all,” says Roper. They include a self-taught rock climber, a farmer “hunting sheep since I was 10”, and a woman whose father left poignant records of his service in remote Comeragh glens with the West Waterford IRA flying column.

Dwan is a Waterford City native, and Roper, from England, is long-settled in the county. But they were only introduced a decade ago when a mutual friend, the Waterford playwright Jim Nolan, realised both men were ready to do something new. Dwan had a background in photo-journalism but was moving towards nature photography; Roper, with several highly regarded poetry collections already to his credit, wanted to connect more deeply with local landscapes.

Dwan took him on a walk from Waterford City along the Suir to the sea, and The River Book: a Celebration of the Suir (2010) was born. Its success led to The Backstrand: Tramore’s Open Secret (2013).

Though both earlier books have a similar mix of very diverse material to the Comeragh volume, they are more linear, moving directly along the river, and around the strand. The relatively vast scale of the Comeraghs demanded a different approach: a route that the authors mapped out like a figure-of-eight, or perhaps a Moebius strip, constantly folding back around itself.

“We wanted to take the reader in sideways,” says Dwan, as we walk another section of that route, towards the Mahon Falls. It’s an apt description. The photographs, prose, poetry and interviews are often juxtaposed in oblique, surprising ways, creating unexpected connections between people, places and wildlife, much as you might find on a long hike.

Mahon Falls is the most popular destination in the Comeraghs. Two couples, equipped with a loudspeaker playing trance music in a haversack, pass us by. Mercifully, the valley swallows them quickly. We all express bafflement at the fear of silence that demands a permanent electronic soundtrack. But, of course, this valley is never silent, but holds many musics.

We scramble over the huge boulders at the base of the falls, finding magical bowers for hart’s tongue ferns, for the starry white flowers of marsh bedstraw, and for a Comeragh speciality, the St Patrick’s cabbage saxifrage.

The clouds sweep in again. Dwan comments on how the colour of the cliffs has shifted with the clouds, from gleaming grey to mauve. He is as animated as if he were seeing it all for the first time.

Both men bring the same fresh eye to the radically different landscape of Tramore’s back strand, our last hike. They take pleasure in otter slides and kingfisher perches, common fleabane and yellow wort. Familiar sights to them, but continuing sources of delight.

Dwan wonders why so many nature-lovers’ programmes focus on rare species. He leads ‘Time Outside’ walks for school children and adults. He says his mission is to alert walkers to the joy of the commonplace, to Merton’s celebration of “all the things and moods of one good place”. It’s easy to imagine him succeeding.

Roper’s poetry often engages with the barely perceptible, but inexorable, changes in the outline of the Comeraghs over time, but he notes the back strand lagoon changes dynamically with every tide. Both men reflect briefly, unsentimentally, on how recent brushes with their own mortality have made them feel more alive.

Walking with them is, as Seamus Heaney once wrote of a neighbour, “intimate and helpful, like a cure you didn’t notice happening”.

Comeragh is available from whimbrelpress@gmail.com

“I must have the map of the Comeraghs printed on my feet,” Declan McGrath reflects wryly, talking about his research for his monumental Guide to the Comeragh Mountains. He published the third, greatly expanded, edition last year.

This book would be a remarkable achievement for a specialist in any of the fields so comprehensively and accessibly covered: geology, fauna, flora, archaeology, and critical conservation issues. McGrath also documents his remarkable successful in securing EU support, as a private citizen, to make Waterford County Council reverse its support for a very damaging development, a road running directly to Mahon Falls.

And McGrath is not a specialist, but a maths teacher at WIT who became passionate about peregrine falcon conservation in the 1980s. He soon found that everything in an ecosystem is connected to everything else, and recorded what he learned.

His guide is the perfect, information-rich complement to Dwan’s and Roper’s inspirational introduction to these remarkable mountains.