Why should students living at home subsidise those living in campus accommodation?

Opinion: On-campus rent increases have sparked protests, but it has to pay for itself 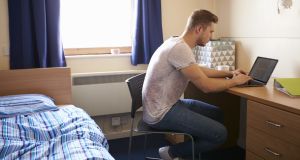 In an ideal world there would be government funding for student housing, but there is not. Photograph: iStock

The housing crisis, as well as long commutes, were clearly major issues with many young people who voted for Sinn Féin in last month’s general election.

For many students too, many of whom travel long distances to get to university on a daily basis or pay high rents, accommodation was the defining issue.

As well as impacting on their academic studies, a tough travel regime and the need to do part-time work to pay the rent can limit students’ participation in university life and limit the benefits of higher education.

I was fortunate to live in college in my final year in Trinity in the 1980s. It enriched my time academically, culturally and socially and gave me many opportunities to participate in social activities with my peers. I didn’t have to work to pay the rent, nor commute from my parents’ house in Wexford to the college – and some students do that commute now.

In an ideal world, university students should have the option of reasonably priced accommodation on campus. In an ideal world, there would be government funding for student housing, but there isn’t. To build the extra provision of recent years on Irish campuses universities had to take out loans from the European Investment Bank or make business arrangements with private investors. Loans, of course, have to be paid back.

On-campus housing in Irish universities is generally maintained to a high standard. While the recent rent increases announced by some institutions have sparked off protests from students, the reality is that on-campus accommodation has to pay for itself. It cannot be cross-subsidised by revenues from student fees or research grants. Why should students living in flats or at home subsidise those living in university accommodation?

On-campus accommodation is, in addition, essential if we are to increase the numbers of international students coming to study in this country. Being new to Ireland, they most of all need guaranteed accommodation for their first year of studies.

The universities are also able to rent out rooms when term ends to visiting academics, students, tourists and others. This provides much-needed revenue that subsidises academic activities – in Trinity, 80 Ussher lecturer salaries are partly paid from these commercial sources. It’s one way we can offset the massive drop in public funding of higher education. The income earned is ploughed back into essential academic activity.

Campus accommodation for students is now a feature of universities in Ireland. It’s common in the UK and the US but not so common on the European mainland and there used to be very little of it in Ireland until the universities took action.

When the first round of CAO offers is issued to first years in August, the mad scramble for off-campus apartments or digs begins in earnest

Universities recognise the benefits of such accommodation. The Higher Education Authority (HEA) in a 2015 report quoted US studies showing that students living on-campus are more likely to complete their studies, and in a separate study in the UK it was found that students in on-campus accommodation have a lower dropout rate of 4 per cent compared to a rate of 10 per cent for others. This may well be because of the closer proximity to facilities such as libraries, study venues, restaurants etc, and the advantages of peer networks in sport clubs and societies.

Some Irish universities are already accepting applications for accommodation for first-year students for next autumn and the remainder will do so over the next couple of months. Demand always outstrips supply; in Trinity we have almost three applicants for each space.

Inevitably many will be disappointed. When the first round of CAO offers is issued to first years in August, the mad scramble for off-campus apartments or digs begins in earnest, prompting the predictable media reports about a student housing “crisis”. This race for a place to live in is complicated by the tight timeline between the Leaving Certificate results and the CAO offers, which leaves a very short timeframe to identify and access accommodation. That’s why universities try to house as many first-year students as possible.

The HEA report led to the National Student Accommodation Strategy which has resulted in a significant increase in purpose-built student accommodation (PBSA). At the end of June last year, a further 6,691 PBSA bed spaces had been completed; 5,986 were under construction; 8,577 had planning permission and 203 were at the application stage. Much of this is in close proximity to college campuses.

Progress, yes, but we still have a way to go to meet the growing demand. This summer Trinity will open Printing House Square on Pearse Street with 250 student beds, and we hope to construct more in Trinity Hall, Dartry. The only way to solve the general accommodation crisis – including the student accommodation problem – is by increasing supply. All political parties are agreed on that priority, which is a good starting point. Who has the policies to make it happen remains to be seen.

Patrick Prendergast is provost of Trinity College Dublin and an engineer. He is also chairperson of the Irish Universities Association.