Why corporate social responsibility is a core element for some businesses 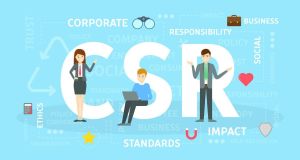 ‘Younger generations are saying they are interested in certain causes and will select employers based on what they are doing on them.’ Photograph: iStock

JP Morgan chief executive Jamie Dimon and dozens of other leaders at some of the world’s largest companies last month said they plan to abandon the long-held view that shareholders’ interests should come first in business.

The purpose of a corporation is to serve all of its constituents: employees, customers, investors and society at large, they said. It may seem like a radical thing to say, but the phenomenon – known as corporate social responsibility (CSR) – is here to stay.

To explain it in simple terms, CSR is when a company does something that – on the face of it at least – appears to be aimed at contributing something positive to the community or wider world, other than, of course, economic activity.

But don’t be fooled. The reason companies engage in this is because they believe it gives them a competitive advantage. Ibec head of corporate affairs Siobhán Masterson describes this as the concept of “shared value”.

“It’s where policy and practices that enhance the competitiveness of the company simultaneously improve the economic and social conditions in the community in which it operates,” she says. “It sounds basic, but it’s actually quite significant.”

She says there are a lot of examples in emerging economies. “The likes of Nestlé has these milk farm projects,” she says. “MSD has been rolling out diabetes products in China to address the huge spike in the condition.

“They’re doing this on a charitable basis, but of course they are also increasing their market. It sounds like a cynical way to operate if you look at it coldly, but, if you think about it rationally, there is a huge carrot for businesses to do this.”

Masterson says another aspect of CSR is company leaders. “You’ll have noticed a lot of CEOs are taking on these causes,” she says. “They are defining themselves not just by their success in business, but also around what they achieve in terms of sustainability.

“They have moved from these statements of ‘doing no harm’, and leaving the planet as they found it, to actually saying ‘no, we want to do better than that. We want to leave the planet in better shape.’

“It’s not a choice for a company any more. Small companies might do something like buy the town’s Christmas lights or sponsor the local GAA club, which might differ a lot from what a multinational might do.”

So what are the competitive advantages driving companies to act this way? One of the main ones is attracting and retaining talent. “Graduates are more aspirational than ever,” as Ruairi Kavanagh, editor of GradIreland puts it. “They are looking for workplaces that fit in with their values.”

Masterson agrees. “The key driver of this is talent and next-generation talent,” she says. “Younger generations are saying they are interested in certain causes and will select employers based on what they are doing on them.

“That could be sustainability or climate change or whatever, and because there is so much competition for talent, companies want to do as much as they can to attract and retain that talent.

“Companies have whole teams working on these issues now. They are not an add-on. They are integrated into the business and are part of the strategy around attracting and retaining talent.

“During interviews nowadays, it’s almost like graduates are screening employers rather than the other way around. In a sense, the tables have turned.”

Abbey Carlton, director of social impact at recruitment website Indeed, says CSR is “core” to its business and how it goes about finding jobs for people. “We focus on struggling jobseekers – those who face significant barriers to employment,” she says.

“These may be jobseekers without a college degree, from low-income backgrounds, with limited work experience, who receive public assistance, from traditionally disadvantaged groups such as those with disabilities, the long-term unemployed, and migrants.

“By identifying a set of common challenges across these groups, we can impact a range of jobseekers rather than one particular population.” Carlton says this approach helps staff at the company “to truly appreciate the importance of their work”.

“Not only is it a chance to give back to the communities that we live and work in, but it’s also an opportunity for them to learn about our products and supports from those that need them the most,” she says.

“It’s not just that giving back feels good. It’s also a development opportunity for us as a company and as employees.

“CSR also allows companies to tell the company story in a way that connects them to their current and prospective employees. It shows people in a meaningful way what that company values.”

Earlier this year, Indeed conducted a large international survey, and the main finding was that employer reputation is crucial for jobseekers as 92 per cent said pride or shame at working for a company would influence their decision to apply for a role there.

Carlton says there is a whole range of ways companies engage in CSR activities, no matter their size.

“One approach is to mobilise your workforce in the local community, volunteering and fundraising for local causes that your employees are passionate about,” she says.

“We see the greatest opportunity for impact when you align your social impact work with the heart of the business.

“What is your business about, and how can you redirect some of your efforts towards the non-profit sector and the users of your product or service that might be struggling on the margins?

“For us, that starts with recognising that millions of qualified jobseekers are often overlooked or face barriers to finding work. We focus on inclusive hiring – using our technology, insights, expertise and networks to make sure everyone gets a fair shot.”

Later this year, Indeed will launch a project to help athletes transition their talents into new jobs when they retire. Carlton says Indeed has committed to helping 1 million jobseekers around the world find employment in the next five years through CSR schemes.