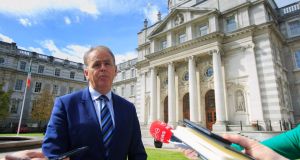 There are no official figures on the number of children with special needs who are do not have an appropriate school place, Minister for Education Joe McHugh has acknowledged.

Parents and campaign groups estimate that hundreds of children are without school places and, in many cases, have been told that home tuition is their only option.

Mr McHugh has admitted that the Department of Education has no overall figures for the number of children who required an appropriate school place.

Up until recently the Department of Education and the National Council for Special Education (NCSE) were advising that the only shortages of school places were in Dublin 15 and Kildare.

However, Mr McHugh acknowledged on Tuesday that there were “acute” issues in other areas, including elsewhere in Dublin and in Cork.

“We’re constantly being informed by the NCSE . . . Anecdotally, we hear from time to time of different parents who contact us individually . . . I know in Cork there outstanding issues there and in different parts of the country there are acute areas,” he said.

When asked if he had any figure on the scale of these shortages, Mr McHugh said he did not.

“We don’t have a collective figure around that, but we will continue to engage with our education partners . . . This is something which is really, really important and also an issue which teachers are anxious to see through as well.

“I know there are tensions there as well, with schools who feel they don’t have the adequate resources or capacity to deal with these issues . . . It’s very complex and not as just a case of putting on additional classrooms.”

Adam Harris of the autism charity AsIAm, said he welcomed the Minister’s admission that the lack of school places was a bigger issue than has previously been acknowledged.

He said last April that Mr McHugh was quoted as saying that his official advice was that there were sufficient special class placements to meet existing demand nationally.

“As we enter a new academic year there are still a plethora of children unable to attend school. The department and the Minister must take responsibility and address this crisis in a meaningful way,” Mr Harris said.

He said many parents of children with special needs are being forced to accept places as a last resort in mainstream classes, despite the fact their psychological reports recommend a special class or special school place.

“These are the children who will be at risk of being placed on reduced timetables, being suspended or expelled. What are his plans for these children?”

He said a central challenge for families is a “lack of engagement” from the department and NCSE on this issue.

“On an individual level we see families who simply cannot get any engagement or support from their special education needs organiser in identifying a suitable place.

“At a policy level we have seen a total failure by the department to engage with the facts and believe parents. We need real engagement to move this issue forward and address it comprehensively,” Mr Harris said.