Why are students so poor at Irish after 12 years of school? 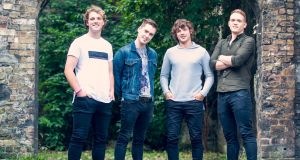 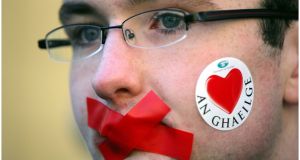 Irish is among the least liked subjects in secondary schools, studies show. Above, a student at a protest in 2011 over Fine Gael plans to make Irish optional in the Leaving Cert. Photograph: Bryan O’Brien 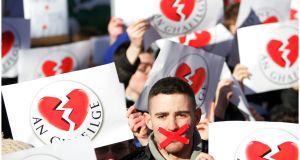 Student protests against plans to make Irish optional in the Leaving Cert. ‘The language won’t truly flourish until there is an overhaul of the teaching of the language in schools.’ Photograph: Bryan O’Brien

Imagine you spent more than a decade learning a second language – sweating through thousands of hours in tutorials, orals and exams – only to find you were barely able to string a coherent sentence together?

It’s a familiar territory for many of us who’ve tried to learn Irish. While most people in Ireland learn the language for about 12 years, a very small proportion can speak it fluently.

The language is consistently unpopular among students, with ESRI research from last year indicating that it is among the least liked subjects in secondary schools.

While the language may be floundering in the classroom, some are taking a different tack by making Irish fun and accessible to young people through activities and music.

This is what the band Seo Linn is aiming for. The group found fame three years ago when their Irish language cover of Avicii’s Wake Me Up went viral.

Five million downloads later, the band is continuing its goal to make Irish fun with a new album, Solas.

It’s not just music, either; they are releasing a book alongside it full of everyday Irish language to help young people learn how to speak it with their friends and family.

“Three of us in the band are primary school teachers,” explains Stiofan O’Feareal, vocalist and guitarist with the band.

“When we had the album done, we thought ‘how can we make this the best possible resource for everyone who wants to learn?’ Obviously, the music is the centrepiece, but we have a 60-page workbook as well.”

Seo Linn are not alone in their attempt to inject some fun into Irish. Seán Greif’s initiative, Moontour, aims to get children speaking Irish through two-week courses that include sports, yoga, photography and drama.

The idea came from Greif’s own experience with learning foreign languages.

“I spent six months living in the Brazilian Amazon, a very remote part of the jungle with a tribe,” says Greif.

“I learned Portuguese to more or less the same standard I had of Irish in that time. In that experience, there were no books, no teacher, no classroom, so I started to wonder what the difference was between those two experiences.”

As he continued to travel and went on to learn Spanish in five months, Greif realised that his learnings could be applied back home to the Irish language.

“We developed an adventure learning framework to teach languages effectively through adventure. The idea is that with experiential activities, you’re increasing the level of engagement and language retention among students.

“We enable students to engage with the subject matter in a way that’s relevant to them.”

Now, Greif believes the Irish language is experiencing a revival as more young people engage with it outside the classroom.

“When I started Moontour, the goal was to solve a problem,” says Greif. “I think that there’s no more evidence of a wasted opportunity than investing 12 years into something, as we do with the majority of our students in this country, and for them to leave with very little grasp of that subject matter.

“It’s something we should be exploiting because bilingualism has been shown to improve mathematical ability and artistic ability, and it’s also been proven to delay the onset of dementia. There is something we’re not doing right.”

O’Fearal agrees with this and says that people need to start seeing it as a living language again.

“The ultimate goal for a language is communication, and you can get caught up in poetry and things like that,” he says.

“Our book is very much an attempt to shift people’s attitudes to make it more relevant to the average learner. It moves it away from being this boring thing that keeps kids away from playing outside in the yard to something that’s cool and fun.”

This sentiment is echoed by Éamonn Ó Dónaill, director of education with Gaelchultúr, which runs online and classroom-based Irish language courses.

“Some people use it for independent learning on their own, so we have users in every corner of the globe in far-flung places, such as the US, Canada, Australia, and England, but also Spain, Germany and France, ” says Ó Dónaill.

If those with no connection to the language abroad can pick it up with such ease, why can’t we do the same in Ireland?

“The language is very, very badly taught in schools,” Ó Dónaill says. “The approach to teaching is very outdated.

“Teachers aren’t aware of the approach used internationally in the teaching of languages. The type of teaching that takes place would be described as teacher-fronted, so there is very little interaction between pupils.

“The teacher is in control of the learning, and there’s no autonomy or groups or no emphasis on that kind of interaction between learners.

While O’Fearal and Greif believe they’re starting to see a shift, Ó Dónaill says that the language won’t truly flourish until there is an overhaul of the teaching of the language in schools.

“I don’t think it’s going to become any more popular within the school context until the approach to teaching it and the focus changes in the curriculum itself.

“Outside the school setting, people are doing interesting things with the language and attracting speakers to it.

“So, despite all the harm being done in the school system, there are a lot of positive things happening outside of that environment.”

While the school system may not produce fluent Irish speakers, there is no doubt that innovative methods of learning the language are changing it for the better. A revival may well be on the horizon for the Irish language.

Can singing songs ‘as Gaeilge’ make you a better speaker?

A 2013 study from the University of Edinburgh suggests that singing in a foreign language can help you learn it.

In fact, the study found that those who sang songs or short phrases in the language they were learning were twice as good at speaking the language later than those who didn’t.

This is particularly easy with Irish due to the wealth of songs in the language. From traditional music such as sean-nós singing to more modern music, music can serve as a helpful tool in grasping Irish.

If you don’t want to listen to traditional music and prefer Katy Perry or Avicii, Seo Linn have led a wave of musicians that are translating hit songs into Irish.

So if Perry’s Roar is more your style than Enya’s Athair ar Neamh, then singing along to Seo Linn’s Irish language covers can help you to reach the peak of your Irish skills.